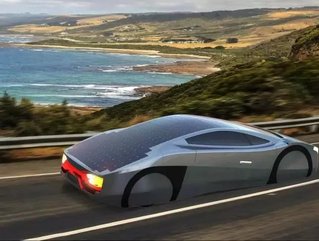 The rise of solar power popularity continues, as a local Australian startup is in the process of building the world’s first solar-powered, eco-friendly sportscar called “Immortus.”

Along with researchers at Swinburne University of technology in Melbourne, the Australian electric vehicle startup EVX is designing the innovative car inspired by solar race car technology as well as a collection of post-Apocalyptic films.

While Immortus can be operated like a normal eco-friendly electric car, it will also include seven square metres of solar photovoltaic paneling on its roof. The environmentalist-dream automobile will use the sun’s rays to provide additional power to the car while it’s being driven.

While the Tesla Model S is has a large 85 kilowatt battery pack, the self-charging system on the Immortus uses only a 10 kwh lithium-ion phosphate battery.

The project was originally founded by Australia’s Aurora Solar Car Team, which has competed in several solar race events around the globe. The Immortus combines maximum sun exposure with extreme aerodynamics to help it handle like a well-balanced sports car.

The added boost of energy will help remain drivable for an extended period of time, as EVX claims the car will get up to 550 kms out of its battery at an average of 85 km/h, which is slightly more than rival electric car company Tesla.

However, those at EVX acknowledge they’re not attempting to duplicate what Tesla has done.

“We’re not trying to be a Tesla,” said EVX CEO and co-founder Barry Nguyen. “Tesla is a mass manufacturer of cars, we’re designers of a boutique custom electric cars and aftermarket products.

“There’s regulations in the U.S. and Australia that allow for individually constructed vehicles. Essentially, what that means is that if you contract a custom car builder with the designs and components, you can build a road legal car without the crash testing and the $5-10 million you’d have to raise to do that. We plan to sell those cars in low volume.”

Since it still lacks a significant amount of funding behind it, Immortus is more of an idea at this point than reality. Still, EVX is targeting SEMA 2015 in Las Vegas this November as the date it will release its first prototype.

With a sleek design and an ability to reach 100 km/h only seven seconds, Immortus will be a limited edition automobile with anticipated selling price of $370,000.

But this state-of-the-art innovation is laying the groundwork for a whole new category of vehicle for the future.