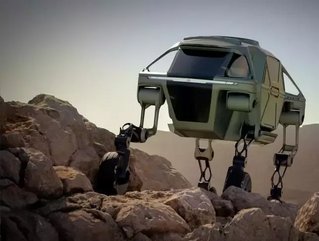 In its press release unveiling the concept, Hyundai said the vehicle would have multifarious applications whilst placing a focus on the role the vehicle could have regarding responses to natural disasters.

“When a tsunami or earthquake hits, current rescue vehicles can only deliver first responders to the edge of the debris field,” said John Suh, Vice President and Head of Hyundai CRADLE, in the press release. “Elevate can drive to the scene and climb right over flood debris or crumbled concrete.”

Suh added that the vehicle’s potential extends beyond emergency services. “People living with disabilities worldwide that don’t have access to an ADA ramp could hail an autonomous Hyundai Elevate that could walk up to their front door, level itself, and allow their wheelchair to roll right in.”

Elevate’s design includes in-wheel propulsion and interchangeable modular components to enable it to tackle a variety of situations effectively, as well as being uniquely capable of both mammalian and reptilian walking gaits.

Hyundai noted a few feats that Elevate will be capable of: stepping over a five-foot gap, climbing a five-foot tall wall, omnidirectional motion, and legs capable of locking in any position thanks to non-back drivable motors.