How China’s Ping An is realising its sustainability goals 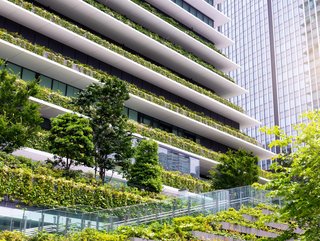 Last year, China’s largest insurer, Ping An Insurance Group, announced for the first time its goal to achieve operational carbon neutrality by 2030, in line with international best practice and the Paris Agreement.

In so doing, Ping An – which is China’s largest insurer and one of the world’s leading financial services firms – joins an increasing number of organisations globally pledging carbon neutrality within 5-10 years, among them PwC, KPMG, Deloitte, Pfizer, Apple and Google, with around a quarter of all companies set to be carbon neutral by 2030, according to Fidelity International’s Analyst Survey.

While European firms take the lead in carbon neutrality pledges, Asian companies lag, positioning Ping An as a regional sustainability leader, as it looks to better China’s own goals to achieve a carbon peak by 2030 and carbon neutrality by 2060.

The Group is dedicated to participating in global sustainable development initiatives and was the first asset owner signatory from China to join UN-supported Principles for Responsible Investment network and Climate Action 100, as well as being the first company in mainland China to sign up for the UNEP FI Principles for Sustainable Insurance.

To deliver on its pledge, Ping An has prioritised internal measures to reduce emissions and is also looking at external ways to further reduce emissions, including purchasing external green power.

Ping An has targeted an investment of US$62.78bn and total green insurance premiums of US$39.24bn.

The journey so far – how Ping An is delivering on goals

So, how is Ping An progressing? So far, so sustainable, it seems.

Throughout 2021, the firm focused on reducing the impact of its operations on the environment through energy-saving transformation, smart office features and digitalisation to reduce energy consumption and carbon emissions, and according to its latest sustainability report, has achieved a decrease in carbon emissions by 19% year-on-year to 429,000 tons.

Ping An has managed to reduce energy consumption within its own workplaces and leased workplaces by 2.65% year-on-year, and its total paper consumption by 75.89%.

So successful have Ping An’s measures been that the firm has been rated A- in the Carbon Disclosure Project, the highest rating obtained by a mainland China-based financial company; and in 2021, was included for the first time on the FTSE Russell Sustainability Index (FTSE4Good), the Hang Seng ESG 50 Index, and the Hang Seng China Enterprises ESG Index. 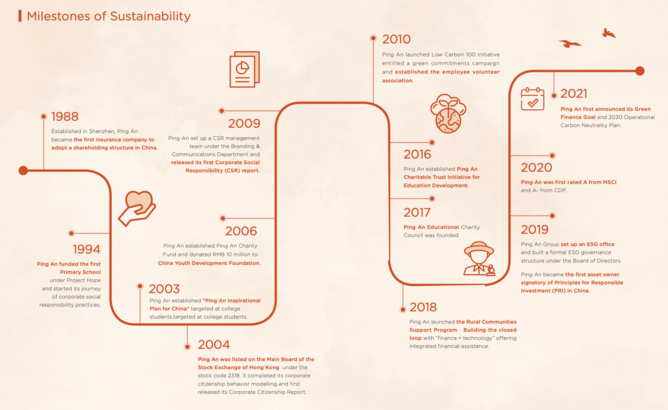 Along with its own carbon neutrality goals, Ping An is committed to incorporating ESG concepts into insurance business development and insurance product design, and in 2021, updated its policy in line with the United Nations Environment Programme Finance Initiative.

The insurer is passionate too about the promotion of responsible investment, last year put into place strict standards for monitoring the investments in high pollution and high emission industries.

Giving back to the Chinese community is an ongoing goal for the company, which is dedicated to the revitalisation of rural communities.

In 2021, under the Ping An Rural Communities Support programs, the firm provided US$1.88bn for industrial revitalisation, and leveraging its premium medical resources trained village doctors, upgraded village clinics and provided health checkups for rural residents. This included the provision of charitable healthcare services to 9,483 people, the recruitment of 875 volunteers, who provided more than 20,000 hours of online and offline teaching services at nearly 130 Ping An Hope Primary Schools

As of December 31, 2021, the company has contributed US$6.58bn for poverty alleviation and industrial revitalisation, funded 199 primary schools and recruited nearly 10,000 volunteer teachers who have served around 370,000 hours.