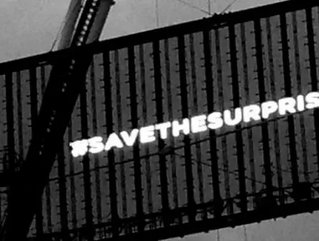 It would be so tempting – and quite easy – for spectators to spoil Friday’s Olympic Opening Ceremony and share photos of this morning’s rehearsals, but thanks to a smart campaign implemented by the organisers, most details are still under wraps.

By promoting the Twitter hashtag #savethesurprise and, according to a few attendants, at the request of Slumdog Millionaire director Danny Boyle, those lucky enough to catch the Opening Ceremony before Friday should keep the details to themselves. Impressively, many are doing just that.

Several tweeters present at Olympic Stadium are actively getting behind the motion, berating those who take to the social media networks to post spoilers. This one appeared on iTV.com:

Unbelievable the number of people who can't #savethesurprise and are happy to tweet a photo. THE CLUE IS IN THE HASHTAG!

While the ceremony’s theme “Isles of Wonder,” adapted by Boyle from William Shakepeare’s play The Tempest, has been known for weeks, earlier this month, London tabloid The Sun ran a photo spread of the grounds. Images depicting the Stadium transformed into a scene English countryside complete with farm animals, wheat fields and a water mill may have been splashed across its pages, but the real magic of the ceremony – the performance, the entrance of thousands of elite athletes flooding the arena, and the lighting of the cauldron – is the surprise worth waiting for.

According to several tweeters such as this one, it certainly won’t disappoint:

“If you’ve got plans Friday night, cancel them. Opening ceremony is out of this world. Danny Boyle, I salute you.”