The Business of Building Relationships 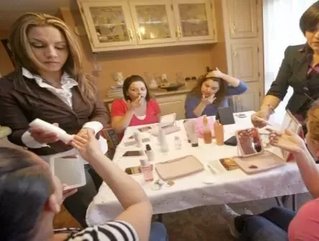 While sipping coffee in an old friend’s kitchen during a trip to her native Poland back in 1982, Mazur couldn’t help but notice her friend’s two teenage children bustling around the kitchen. They appeared to be preparing a meal, but it was much more involved than a typical 13-year-old’s sandwich or boxed pasta creation: these kids were chopping, grinding and blending ingredients like professional chefs, aided by an unusual looking cooking appliance.

To Mazur’s amazement, within minutes, she and her friend were served a homemade feast by these young cooks.

Her friend introduced Mazur to the kids’ secret weapon: Thermomix, a do-all cooking device that grinds, kneads, whips, grates, beats, steams and weighs food, among several other functions. You can use it to make bread to go with your home-churned butter, and it even makes preparing once-challenging accompaniments such as hollandaise sauce an easy feat for non-cooks.

Of course, as Mazur recalled, it’s difficult to believe that any of this is possible without seeing it done firsthand.

“I was the biggest skeptic of all,” said Mazur, who decided to test the Thermomix out in her own kitchen. She imported a device from Europe herself and began her experiment in Perth, where she now lives.

The experiment ended well: in 2001, Mazur became the Australasian distributor of Thermomix, and from Western Australia, she began to build her direct selling empire to accomplish what these teenagers had inadvertently done in 1982: show others how to incorporate the unique appliance into their own lifestyles through personal demonstrations.

‘Direct selling’ involves a sales transaction occurring between a sales consultant and a consumer within a consumer’s home, office, or other meeting place, rather than a retail location. Today, hundreds of companies all over the world employ this method to sell a huge variety of products, including cosmetics, skincare, fragrances, greeting cards, kitchen and housewares, fitness equipment, nutritional supplements, cleaning products and education materials.

According to a report released by Direct Selling News, in 2010, direct selling companies worldwide generated more than US$125 billion in revenue across 150 countries, through more than 75 million men and women.

While the biggest direct selling markets are the US and Japan, Australia has a firmly rooted presence: more than 500,000 people across the nation are involved, and the consultants are visiting an estimated two million shoppers’ homes and workplaces each month.

One of the companies at the forefront of this movement sells plastic products that can be found in nine out of 10 homes throughout Australia and New Zealand: Tupperware.

The US-based company, originally founded by Earl Tupper, was established in the 1940s during the postwar boom of gas and electric refrigerators as a method of storing food. Tupper attempted to sell his ‘burping seal’ products in retail shops, but the company failed to take off until a woman named Brownie Wise introduced the ‘party’ concept in the early fifties.

Allowing consumers to touch the plastic products and see how they work in a home setting proved so successful, Tupperware implemented this sales concept as the company’s sole method of selling. Today, a Tupperware party starts somewhere within approximately 100 countries every 2.3 seconds.

Similarly, cosmetics and skincare company Mary Kay has utilised the party concept to establish itself in more than 35 global markets, including Australia in 1971.

“The party is about helping consumers apply [the products] themselves,” said Ian Duncan, former CEO of Mary Kay Australia. “What we offer is personal service: [the consultant] is there to encourage women to try new products and advise her on her skincare and colour cosmetics. You don’t get that kind of service online.”

One of the top benefits that comes from direct selling, particularly through ‘parties’ and other social engagements, is the one-on-one communication between the sellers and their customers to show that the product can indeed fit in with any lifestyle – but without the off-putting sales pitch.

“What the business is, is reaching out to others in kindness. It’s quite a personal development business behind the whole thing,” said Ian Parkin, a distributor for an online greeting card company called SendOutCards that encourages people to reach out to loved ones with personalised greetings through the post, rather than over e-mail or SMS. To inform more people about the product, he simply uses it.

“I don’t phone people up, I don’t chase people down; I just send cards. I develop relationships. And that’s what direct selling is all about: building relationships,” Ian said. “People buy from people they know, like and trust. That’s a network.”

Though Ian recognises that there are many competitor companies across the web, direct selling to consumers gives companies like SendOutCards – as well as Tupperware, Mary Kay and Thermomix – a priceless marketing advantage: word-of-mouth marketing.

“There are lots of other services [similar to ours] that spend a fortune on advertising, but they don’t have the power of personal recommendation,” he said. “That’s everything.”

In Australia, women account for 81 per cent of independent salespersons. On one hand, this figure can be attributed to the fact that 15 per cent of the skincare market is distributed by direct-sell companies and of Direct Selling News’ Top 10 Direct Selling Companies in the World, six are skincare and beauty-based.

On the other hand, direct selling is an empowering industry for women, as evidenced by Brownie Wise’s Tupperware parties: they gave post-war women a career path with a compensation plan and a sense of belonging within the community of other saleswomen and party consumers.

“Direct selling, by its very nature, attracts women who want a part-time role and flexibility in their life,” said Duncan. “They can work from home, [and] it’s renewable: a woman could build up a customer base with new parties and a reorder business.”

“I’ve developed a mission and a purpose. I believe that living should work for us,” said Ian, who works from his home in Manly, North Sydney. “My life now works for me, [and] my income comes in whether I’m working or not.”

The future of direct sales

Direct selling is clearly a sustainable way to continue growing a business, but is Australia likely to see more companies relying more heavily on word-of-mouth marketing?

If you ask Ian Duncan, the answer is yes.

“People will come back wanting personal service. We have a niche in that market,” Duncan said. “That’s the key to the future.”

The adage seems to be working for Grace Mazur: within 10 years, Thermomix has permanently made its way into 50,000 kitchens across Australia.

“All it is, is having the right product, the right approach, and the genuine customer care,” said Mazur. “That’s why our workforce is booming.”