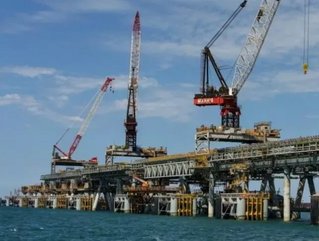 We’re not expecting much good news out of the mining industry this year. With a slump in nearly all commodity prices (including a 47 percent collapse in iron ore’s pricing last year) and a predicted slower phase of economic growth in China, it’s going to be a tough go for mining companies.

However, Rio Tinto’s buyback announcement gives us a little hope that these companies will come out of the slump on their feet. The world’s second-biggest mining company announced yesterday that it plans to spend $2 billion to buy back shares. This comes on the heels of its fourth quarter results, which beat estimates. But how?“We’ve repositioned the business,” Chief Executive Officer Sam Walsh told Bloomberg television. “We are sitting here today with probably the strongest balance sheet of any of the major mining companies.”

The company’s solution—which has confused some—has been to lower costs while also increasing output. A lower Australian dollar as well as recent declines in oil prices has helped Rio continue to trim its mining costs. It predicts a further $750 million cut to costs for 2015, causing spending to fall to $7 billion a year for the next two years.

Obviously the approach has worked thus far, but iron ore accounted for 87 percent of the company’s profit last year. If China’s economic growth slows as much as it expects, to 7 percent, down from 7.4 percent in 2014, and iron ore reaches the predicted and dreaded $30 a metric tonne, Rio Tinto may need to again reassess its current business model. But this doesn’t necessarily mean the company should start looking for easy ways out.

The buyback option Rio Tinto is offering their shareholders should help to further discourage Glencore’s attempt for a merger between the two companies. Rio Tinto has made it clear that Glencore’s “merger of equal values” greatly undervalues the mining company. Rumours continue to pop up about the potential merger, however unlikely they may seem. It seems like for the time being, Rio’s cost-cutting plan is working for the mining giant just fine.