How ALE is giving big lift to mining in Australia 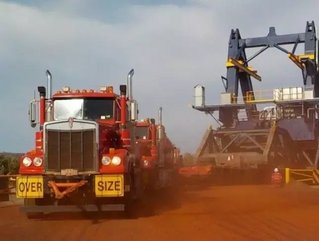 Last week, ALE – a company that specializes in handling, transporting and installation of heavy, indivisible loads – completed the transportation of its largest items for the Roy Hill iron ore mine construction project, using the largest configuration of ALE’s widening trailers to date.

The company was contracted to transport three loads weighing between 310-320 tonnes and measuring between 15-metres wide and 17m high to Port Hedland after the new fleet was delivered in September. Once all put together, the three parts will make a Mine Reclaimer machine used to recover large amount of bulk material from stockpiles.

Due to the size of the items, each was delivered one at a time. Three 240Kw rated trucks were then used to transport the three loads weighing about 540km over a span of three nights before traveling one additional day to reach Port Hedland.

“We have been using the new widening trailers now for about six months, and they are ideal for spreading the axel load required to adhere to the different weight and width restrictions for road transport throughout Australia,” said Neil Vaughan, Project Manager for ALE.

“This is the first time we have configured the trailer in such a way. The specifically designed hydraulic beams, which are fixed to the middle and to each end of the trailer, deliver the width change. By narrowing the trailers for the return journey, we could offer more time and cost-effective solution for the client as permitting issues and escort costs were reduced.”

Funded by Gina Rinehart, the Roy Hill project will be a world-class iron ore mine consisting of a mining operation for hematite iron ore. It is projected to create significant wealth for Australia through the generation of export revenue, employment creation and the payment of royalties and taxes.

With its location in Western Australia, the project is ideally located to supply ore to the growing Asian markets, while it’s also expected to create jobs for 3,600 construction workers and 2,000 operational personnel.

Although the estimated $10 billion project has suffered setbacks, Roy Hill said on Monday that construction was more than 80 per cent complete and is on track to send out its first shipment of ore in September.