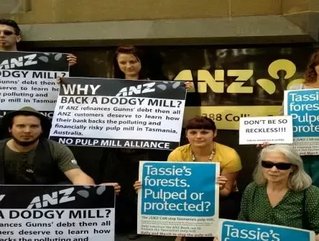 Tasmania’s Gunns Limited has been approved for an extension of its “syndicated debt facility” and “primary working capital facilities” currently totalling AU$340 million, according to a press statement released today by the ASX.

The original deadline was set for the end of the month, but after careful consideration by the ten banks that make up the syndicate, the manufacturing company’s payback deadline has been pushed back to 31 December 2012 in anticipation of the debt gap closing once plans for the Bell Bay Pulp Mill project are finalised and financed.

The pulp mill has been the focus of recent controversy as several Tasmanian advocacy groups have demonstrated against Gunns’ business practices and the potential financial extension.

Last Wednesday, approximately 50 members of the group Friends of the Tamar Valley – the proposed location of the pulp mill – gathered outside the Launceston branch of ANZ Bank in protest of the bank’s support of Gunns. The rally, which was part of a coordinated effort held across Australia, urged ANZ to sever its financial ties with the forestry company, citing its dropping ASX share price and ongoing financial trouble as reasons to abandon their investment in the project.

“It’s only thanks to the bank that Gunns is still standing,” said Anne Layton-Bennett, spokesperson for Friends of the Tamar Valley, in a media release.