The Future of Money is Mobile 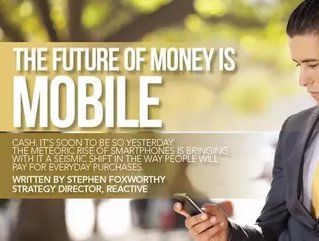 Written by Stephen Foxworthy - Strategy Director, Reactive
Stephen has over 15 years’ experience in digital, with a focus on high performance online retail, customer experience management and multi-channel marketing. Stephen’s long experience in both Australia and the UK includes working with clients such as General Pants Co, Origin Energy, City of Melbourne, Hesta, VECCI, Myer, Fosters, 3 Mobile, Telstra and ANZ Bank.
Many of our major credit cards – Visa PayWave and Mastercard PayPass, for example – feature contactless chips. These cards now include the ability to pay for small purchases simply by holding your card against a reader, with the transaction taking place without requiring authentication via signature or PIN. The intention is to speed up card based transactions and make payment more convenient in high-volume locations, such as convenience stores and supermarkets.

Near Field Communication (NFC) is the technology used for these cards. The small microchip embedded in the cards responds to a radio signal from the reader by transmitting encoded data to identify the card and authorise the transaction.

While contactless credit and debit cards certainly add a level of convenience to small purchases, the new frontier for payments will be smart devices, such as your mobile phone, where even large transactions can be completed with a simple wave of the device in front of an NFC reader.

Over the last couple of years, a number of mobile phone manufacturers have launched mobile phones with Near Field Communication (NFC) technologies, allowing the devices to act as mobile wallets and facilitate transactions as easily as a PayWave or PayPass card.

Nokia, Samsung, LG, Sony, Blackberry and HTC have all produced devices that have been certified for use as Mastercard PayPass or Visa PayWave devices, and we can expect to see more and more compatible devices launched over the coming year. The elephant in the room, however, is obviously Apple. Plans for NFC on the iPhone have been rumoured for some time, but as yet have not been announced by the famously secretive smartphone market leader.

The implication for shoppers is that in the future, purchasing products will be commonly done using your mobile phone, and new ways to authorise payments will increasingly be built into your handset.

NFC technologies, combined with smart payment applications, will open up a whole range of new payments services from the simple wave-and-go convenience of PayPass and PayWave, to friend-to-friend payments by touching devices, or paying money by interacting with vending machines, outdoor advertising or kiosks.

Paying for things with your mobile is only one half of mobile in retail, the other half is how retailers are taking mobile payments.

Being able to take payment via a credit card or via NFC technologies on a mobile device is emerging as an area of innovation with numerous industry players charging forward to provide a viable solution.

Square, a US startup, revolutionised the card payment industry when they launched their mobile payments system designed to turn any iPhone into a card-reader terminal. By allowing merchants to get paid via a small, square card reader that simply plugs into the headphone jack of an iPhone and a simple iPhone app to process the transaction, Square has created a very simple and easy way for mobile businesses to accept credit and debit card payments, without requiring expensive point-of-sale software or hardware.

The service has been a huge success, with a fast growing customer base and worldwide buzz about the technology, although currently only US merchants can sign-up to the service.

Recently, PayPal announced PayPal Here, a similar device to Square aimed at allowing retailers and merchants to receive card payments wherever they are.

The PayPal Here device is, unsurprisingly, not square – it’s a triangular device that also plugs into a smartphone’s headphone jack, and does much the same thing as Square’s card reader: allowing customers’ credit cards to be swiped and then facilitating the transaction via an installed app.

These new products are examples of how mobility is changing the way people shop and buy, and the notion of where retail transactions happen.

Right now, if you walk into an Apple store, a helpful staff member will happily sell you the benefits of a gleaming new Apple product, and will gleefully swipe your credit card on their hand-held devices, ensuring they’re out on the shop floor, and not stuck behind a counter at the till.

Imagine this scenario played out in your living room, on the street corner, at the park with any merchant able to take payments immediately via any connected mobile device and the whole notion of the ‘store’ can be re-imagined.

In the future, our whole notion of a retail experience will be liberated by the ability to transact wherever, and whenever we like. As more and more retailers begin to accept payment through a simple swipe or tap of our smartphones, the whole notion of carrying cash may become a thing of the past.