The HTC Flyer is Latest Device to Enter Tablet Race 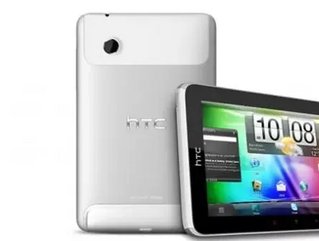 Nearly every major smartphone manufacturer or IT company has launched its version of the tablet computer. Apple was the first with the iPad, and HP, Samsung, Motorola and Sony have quickly followed suit. HTC is the latest brand to roll out its version of the tab—the HTC Flyer will hit stores in the US within the next few weeks.

The 7-inch HTC Flyer is a fast, portable tablet that features a strong aluminum unibody case that is lighter than an average paperback book. The tablet runs on the Google Android OS, but not the latest Honeycomb version. Instead, it operates on a hybrid of Android 2.3 and HTC Sense software.

The company said that the new HTC Sense experience offers an interface rethought for the tablet format which allows users to easily scroll and locate photos, entertainment, weather, calendar and mail. An optional HTC Scribe digital pen unlocks HTC Scribe technology, which enables the ability to capture and annotate any on-screen content with notes and drawings.

There are also front and rear cameras that allow users to make live video calls using a variety of available video chat applications available in the Android Market.

The downsides? The 4,000 mAh battery can only handle four hours of video playback, though the standby time is listed as up to 61 days. Playtime is obviously a lot less. The HTC Flyer also comes without a dual-core processor. HTC’s response is, “We’ve looked to combine the best possible mix of innovative technologies and features to offer a uniquely HTC user experience and we decided to increase the overall performance of HTC Flyer beyond what dual-core can offer today with a new Qualcomm 1.5Ghz processor which provides even faster performance. Today, with the exception of the browser, Android OS is not optimised for dual-core scenarios because it lacks multi-threading.”

The Flyer is going for US$499 in the US and is now available for pre-sale at Best Buy, but an Australian launch dates has yet to be announced.