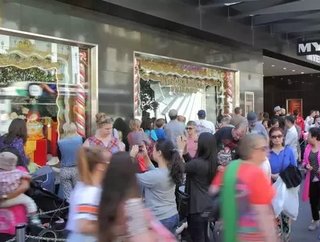 Seven in 10 Australian retailers expect higher sales over the festive shopping season compared to last year, although just 42% expect a growth of more than 2%.

The firm has released its annual Deloitte Retailers’ Christmas Survey, which also found that 64% of participants believe that Amazon’s market entry will negatively impact the retail space as a whole. However, paradoxically, 40% believe it will have a positive influence on their business.

David White, National leader of Deloitte’s Retail, Wholesale & Distribution Group, said: “A number of retailers haven’t survived the year and there is a concern amongst respondents that weakness may continue throughout Christmas 2017.

“With so many new and expanding competitors in the market combined with price deflation and rising electricity costs, it will be a challenge for retailers in the apparel, footwear and department store sectors to maintain margins over Christmas in the face of these headwinds. Food and grocery may find the going easier with price inflation providing a boost to margins.”

Despite, or perhaps because of the nervousness around sales, retailers are holding steady on margins - 43% expect to see an increase in margins compared to 48% in 2016.

The impact of digital is also emphasised heavily by Deloitte. The online share of sales has consistently increased in every survey since 2012, and 2017 is no different.

The number of retailers expecting online sales above 6% has increased from 36% to 52%, with 31% of those respondents (versus 14% in 2016) believing their online sales will be more than 10% of their total sales for the period.

White continued: “We see the market waking up to the digital tipping point, where digital becomes not just a complementary sales channel, but the core of the experience. Retailers are embracing true omnichannel, with the reinvention of the store experience, consolidation of store networks and shifting of large portions of sales onto digital storefronts.”

And what of Amazon? The feedback on the US ecommerce giant’s arrival has been mixed, with 33% saying it will negatively impact their business compared to 40% which believe it will bring benefits.

“Amazon presents both a challenge and an opportunity for local operators,” White added. “Overseas, its domination of online retail has forced many retailers to adapt and find innovative ways to connect and build two-way communication with customers. The Australian market is not isolated; retailers have been quietly innovating as the competition heats up locally.”