Robot production more than doubles in China with 120,000 expected for 2017 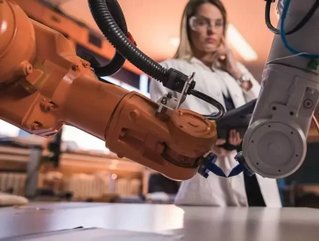 Annual production of industrial robots surpassed 100,000 for the first time in China in 2017, during the first ten months of the year. The output for the full year is expected to reach 120,000 units.

In October, shipments of industrial robots were up 67% year on year, according to reports by state media.

In 2016, 90,000 robots in total were produced in China, which was more than South Korea and North America combined, according to Bloomberg.

Currently, China accounts for a third of global demand for industrial robots as they are a huge part of the “Made in China 2025” plan to upgrade factories using automation.

“Made in China 2025” was announced in 2015 and is a nationwide initiative to improve the manufacturing industry. There will be further initiatives leading up to 2035 and 2049. The scheme is focusing on 20 priority sectors including: rail and equipment; aviation and aerospace equipment; agricultural machinery and technology; and high-end manufacturing control equipment and robotics.

In 2015, around 66% of china’s output was made my foreign manufacturers but now Chinese groups such as Midea Group and Saisun Robot and Automation Group are expanding