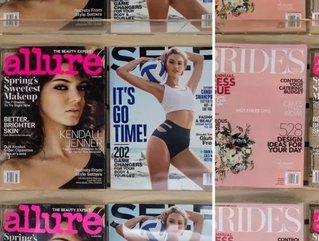 A picture is worth a thousand words, but the lack of an image can be just as powerful.

In New York City, magazine covers were missing their models, as were some adverts lining Times Square. Posters in bus shelters and billboards too, were devoid of the people who were meant to be featured. Instead, in the shadow of the missing person was a simple link: not-there.org.

And what wasn’t there? Women. Women were pulled out of all of these adverts to prove a point: that the world hasn’t yet reached gender equality. The publicity move, done by the Clinton Foundation and Bill & Melinda Gates Foundation, was to bring attention to No Ceilings: The Full Participation Report, a collection of 850,000 data points that show how gender equality has improved and the gaps that still remain.

The marketing campaign and the release of the report coincided with International Women’s Day on 8 March.

“This is about putting a really important issue in front of people,” said Katie Dowd, director of digital strategy at the Clinton Foundation. “We’re really trying to create a moment that feels meaningful.”

Read related articles from Business Review Australia:
It's Not Print Vs. Digital: Combine your Social Media and Print Advertising Efforts
Marketing Small Businesses Down Under On A Budget

And by that evening, the Not There website had garnered over 100,000 views. Looks like the lack of an image may be worth more than a picture. But the organisations didn’t just co-opt these advertisements and posters—social media, online video and radio are being used to promote No Ceilings.

In-your-face campaigns that encompass all types of media certainly aren’t required in order for you to see results from your marketing efforts, but it certainly helps. Advertisers are always looking for new and innovative ways to reach their audiences and touch their lives. And while your message may not be quite as stirring as gender equality, approaching your marketing campaigns in a similar, overarching manner could send a cohesive message to your audience, no matter what kind of media they are viewing.