How Air New Zealand Is Continuing Its Partnership With The Hobbit 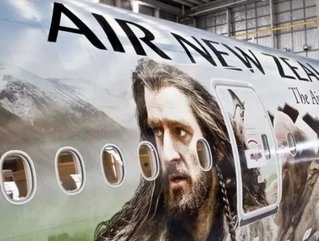 Have you seen ‘The Most Epic Safety Video Ever Made’? We didn’t give it the moniker, Air New Zealand did.

It’s what the native airline is calling its new safety video, which stars The Lord of the Rings and The Hobbit alumni Elijah Wood, Sylvester McCoy and Dean O’Gorman, with a cameo by the director, Peter Jackson. The video also features Sir Richard Taylor, a native renowned film, prop and special effects expert.

New Zealand was host to Peter Jackson’s sprawling retelling of J.R.R. Tolkien’s world-renowned Lord of the Rings trilogy and its prequel, the Hobbit. With a total of six movies to share his vision, Jackson also shared the beauty of New Zealand with the world, inadvertently increasing tourism interest in the country.

The partnership between country and movie franchise has been a long one, with principal photography on the first Lord of the Rings movie beginning in 1999. Since then, Air New Zealand has done several things to promote the country’s connection to the film. Airplanes have been wrapped in images from the movie and renamed, several different promotional videos and safety videos have been made and a gigantic, lifelike sculpture of the character Gollum hangs in the Wellington Airport in New Zealand.

Some believe it’s been too much of a good thing, and are tired of the partnership. However, as long as the airline can continue enticing the movie’s stars to show up for their safety videos, there’s no reason to abandon the genius marketing move.

The Lord of the Rings and The Hobbit are sweeping epics, balancing the fine line between nerd culture and the mainstream.  The final instalment of The Hobbit comes out of the end of this year, creating a perfect opportunity for Air New Zealand once again to showcase their beautiful country.