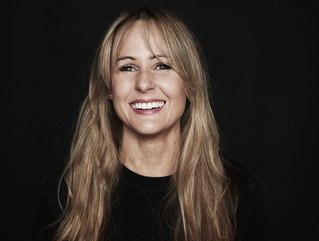 As Founder and Creative Director of majority female branding agency White Bear, Kelly Mackenzie is pushing for greater diversity in the design industry

Leadership in the design industry has a gender problem, declares Kelly Mackenzie, who founded multi-discipline creative agency White Bear more than eight years ago after working on the global rebrand of Cornetto.

Kelly describes White Bear as a small business that “punches above its weight” and that comes up against the big guys regularly. With offices in London and Dublin, White Bear works with disruptive challenger brands and is focused on effective ‘brand building’, from strategy to brand to campaign rollout, packaging, and communications, always ensuring “design that makes fundamental differences to businesses.”

As a woman in the design industry for more than 15 years, working with clients from Unilever to Kopparberg, and securing design awards including Red Dot, DBA, Pentawards, and Transform Awards,  as well as leading her agency to Creativepool Small Agency of the Year 2022, Kelly has not only experienced gender bias, but seen how few women make it to the top design job.

And the numbers back this up, with just 16% of women becoming Creative Directors – a narrative that is played out in other industries, including in tech, where women occupy just 9% of leadership roles.

Why diversity in design matters

The problem with this picture is not just one of equality – the fair representation of females in leadership roles – but one of diversity in design.

Kelly points to designs by men that favour men, including the iPhone, designed to fit a man’s hand; and crash dummies, based on the size and shape of men meaning it is risker for women to drive. “Women are 17% more likely to die in a car accident because cars have been designed for men… it would be easy to rectify if a woman was involved in that process, ensuring our voices are heard.”

“We need to design for a world that is weighted both half men and half women to avoid this happening,” she says. “We need to have representation from both genders to bring diversity of experiences, opinions, and natural differentiators to ensure we are building brands and products that resonate.

“The more diverse the design pool, the more understanding we have of our client’s target audience, which makes for rounder and richer design and creativity. Women make up 80% of the buying decisions in a household, so if we’re not creating brands that speak to women – which can arguably only be done by involving women – then we’re not speaking to our buyers.”

Barriers to diversity in design – pay gap a problem

Getting women into the design industry is not the problem, it seems, with women making up 70% and 60% of graphic design students and junior designers, respectively.

Getting them to stay in the profession is the problem – the entire design workforce is made up of just 22% women with only 11% female creative directors.

Kelly points to pay as the biggest barrier to retention and progression of women, with the design industry already a relatively underpaid one, and the pay gap between men and women making pay an even greater issue.

“It forces women out of the industry, pushing them to change careers, go freelance, or choose a line of work with more flexibility, especially after having children.”

Kelly believes the old design agency model is outdated and broken, and simply isn’t doable anymore, and that the industry must find new ways of doing things. Thankfully, she says, there are a growing number of support groups and committees, not to mention agencies, starting to tackle the issue – providing flexible hours and working practices.

Her own agency, White Bear, is one – supporting women with flexible working, female mentorship, and rewards for those who perform best. And it’s paid off with the agency now a majority female business (67% women) with a 50% female leadership team.

Kelly urges women to ask for more money more often and from the very start of their careers, and when they return to work after having children, to question whether their employers are doing all they can to support them in balancing their work and home priorities.

She further urges women to ensure they “show up as themselves” rather than trying to be someone else, as this allows “you to be present and to think faster… and flourish.

“They should feel confident in challenging the pay gap and standing up to the men’s clubs that can often form in a design studio.”

Here, we ask Kelly five questions about her own career in design, and as a leader.

What are the biggest challenges you’ve faced in your career to date?

Juggling being a mum and a business leader. Running the agency for eight years and then having my little boy four years into that means I’ve been a mother for half my agency life, and the second half has been more of a challenge. Managing the balance between being a good mum and being a good leader is an interesting one. It can be hard to switch off in the business and enjoy home time, and vice versa.

What are your biggest career achievements?

I feel super proud to have grown to a team of 10, and this year, we won Small Agency of the Year at the Creativepool awards. It’s always an honour to win awards, like the effectiveness awards from Transform, for the work we produce, and to be recognised as a leader in the industry by being asked to be involved with amazing initiatives. Recently I was asked to be a director for ‘The Big Idea’, an initiative that aims to put creative thinking at the centre of Ireland’s second-level education system.

We also launched our own similar initiative, Shape, which helps encourage creativity in schools. We have the bit between our teeth and we’re on a mission to diversify the design industry by making practical, problem-solving creative skills available to young people.

I am super proud of everything we do at White Bear – and would never put anything out that we’re not proud of. We have a lot of game-changing work about to launch with some innovative and exciting challenger brands.

A key highlight was the branding work we did for Tom Parker, which won four effectiveness awards at the Transform awards, Creativepool awards and Silver at the Pentawards. But more importantly, I was super proud of the part we played in the growth of the business. We also recently won a brand award for the work we did for employee welfare and engagement company Stribe, which was incredibly effective for the business.

In your opinion, what makes a great leader?

Someone who doesn’t ask anyone to do anything they wouldn’t do themselves, something who actively stands for something culturally and lives by those values, someone who gives back to the team and helps others prosper, and someone who is transparent and clear with their colleagues about what they expect.

What advice would you give your younger self just starting out in the industry?

Go out on your own a lot earlier – be confident and for it. And have fun with it. Always make time to get to know your team and try to meet up socially without talking about work – especially in these hybrid working times. Finally, don’t be scared to share your opinion – there’s no right or wrong answer.

Standing up and showing up has always been my motto!