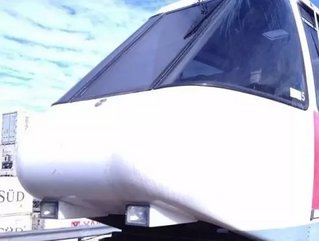 Google did it, so why shouldn’t you?

That’s what anyone with an extra $3,000 lying around should be asking themselves today. Harry Tsoukalas, unfortunate owner of 22 monorail carriages, is selling them all for $3,000 each on Gumtree. The price was determined by what these machines would be worth for scrap metal.

“This is a Sydney icon and I don’t want it mashed up and thrown in with the scrap metal,” Tsoukalas said. “It’s been part of our city for so many years.”

Wondering how the lucky guy ended up with 22 pieces of Sydney history? Tsoukalas worked for Metropolitan Demolitions, the company that removed the decommissioned system in 2013, and inherited them before they were sold for scrap.

Now what was that bit about Google? The company famously bought two of the carriages back when the system was decommissioned and turned them into meeting room in the company’s Sydney office. Looking for a new place to hold your morning status meetings? We found the perfect solution.

A spot for meetings is creative, but what else could you turn these Sydney monorail carriages into? Don’t worry, we’ve got a few ideas for you.

Be the best parent ever: new play house! Is $3,000 worth the future hours of endless entertainment and joy your kids would find from having this as a play space? If you have the money, we say yes. The inside could be retrofitted to include all sorts of fun ways for kids to have fun. There’d probably have to be some safety work done to it as well, and it would need to be mounted to something in the backyard, but how much would you love having a place to play with the kids that was big enough to fit an adult, too?

Thinking about opening a restaurant? All across the US, old trolley carriages have been turned into little boutique cafes, diners and—if you could string a few carriages together—restaurants. Again, a lot of retrofitting would be required as tables and an oven are probably required, but the results would be a one-of-a-kind dining experience in the heart of Australia.

One word: art. Several of these carriages are already in museums across New South Wales, but more so because of their history, not their future. What if you could turn them into a blank canvas? Your business could purchase a carriage and work something out with the city to allow it to be a public art feature, allowing street artists and anyone interested to add to its legacy.

Many of these ideas are a bit outlandish and impractical for many people and companies, we know. But you don’t have to be Google to create something awesome from a $3,000 hunk of metal. What would you create? Let us know on Twitter.