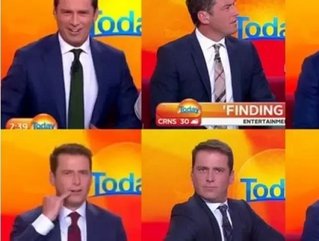 Regardless of what you think of Australia’s Today show co-host Karl Stefanovic, his recently revealed stunt was grounded in compassion for his female peers. It also proved a point that many people continue to ignore.

That point? That sexism is still alive and well.

Karl Stefanovic, co-host of the popular morning programme Today since 2005, wore the same blue suit on air for an entire year to prove that women were judged on a different scale than men.

"I'm judged on my interviews, my appalling sense of humour—on how I do my job, basically,” he told 9 News, which is on the same network as Today. “Whereas women are quite often judged on what they're wearing or how their hair is ... that's [what I wanted to test]."

The result of the experiment did not surprise him: no one noticed. While his co-host Lisa Wilkinson is judged daily—and often quite rudely—on what she wears, Stefanovic could get away with a ‘stinky’ overworn suit and be judged solely on what he, as a person, brings to his job. Wilkinson has spoken about the harsh criticism viewers have levied towards her, making news last year for sharing this viewer email in a lecture: Who the heck is Lisa's stylist? Whoever it is has Lisa in some shocking clothes. Today's outfit is particularly jarring and awful. Just my two cents worth. Get some style.

Some people commenting on the stunt say that this isn’t newsworthy, as women are largely the ones who comment on each other’s fashion choices. But this is not the point Stefanovic was attempting to make. Regardless of which sex is commenting on Wilkinson’s attire, she and other women are being judged on a different scale than men, namely, that a woman’s worth is in her appearance, while a man’s worth is in his performance of his job. To reach gender equality—in the workplace and out—people will need to be judged on their ability to do the job, not on their fashion choices.