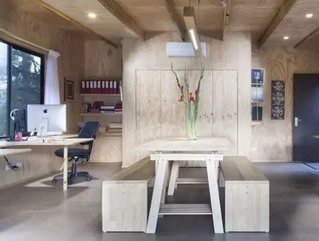 POMO, an internationally awarded boutique creative agency, has won the Best Sustainable Commercial Building Design title for their “Bush Studio” on the Sunshine Coast. The award was given at the Building Designers Association QLD awards held in Brisbane at the end of July.

“We are stunned and thrilled with the win,” Stephen Burton said after receiving the award on Friday night. “I feel very privileged to have received the award.

“It’s been a very rewarding process taking the design from concept to a tangible, serene work environment.”

With a win in the Sunshine Coast region and the State, POMO’s Bush Studio is also up for the national competition win. That event will be held later this year in Melbourne.

The building, both a functional and beautiful space, is on the side of a valley and offers a full deck viewing platform of the surrounding fauna. To leave as little impact as possible on the surrounding landscape, the roof was designed to create a waterfall that cascades from the roof in front of the deck when it rains, allowing the water to return to the natural surroundings.

The sustainability features of the design include:

- minimal use of hardwood structural timber, opting instead for manufactured timber beams sourced from plantation forestry

- no use of carpet on flooring (exposed manufactured board instead)

- no paint on internal surfaces

- no earth moving was required on the site, all soil unearthed from hole drilling was used in landscaping around the building

- no major trees were removed from the site, instead the building was located in a corridor of old-growth bush trees using the trees as a feature

- all glass and steel was sourced locally from the Sunshine Coast