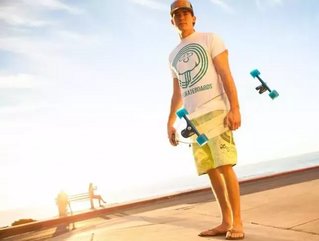 The skateboarding industry is cyclical in nature, with innovation behind every curve. Like ripples in a pond, they seem to begin in California and reverbrate out into other markets. Since embracing skating in the early ‘60s, Australia has more or less mirrored U.S. styles and trends. Good weather, high-class facilities and a high standard of living have all contributed to a skate-friendly environment that has promoted a local industry with a lot of international attention.

RELATED TOPIC: Can Billabong's First Profit in 3 Years Put the Surf Brand on Wave to Success?

San Diego-based skate company Jelly Skateboards is pushing the boundaries of what is known in the skate industry. Integrating aspects from skating, snowboarding and surfing into one board, the Jelly Skateboard is innovating and challening the norm—and Australians can expect the product to hit the market soon.

From bearings to bullets

President and co-founder Sven Alwerud, 25, was skating across campus as a business major just 10 short years ago. Today, he runs a start-up company that is valued at US$ 650,000 and is expected to continue to see massive growth.

The idea behind Jelly Skateboards began like many other great innovations: boredom.

When Alwerud and his friend (now co-founder) Cody Leuck were 15-years-old, they called upon Alwerud’s father, Sven Sr., to help them build a skateboard.

A robotics engineer and the founder of Inventek Engineering, Sven Sr. recommended the boys use two-use polycarbonate—the same material that is used to coat bank windows and the canopy of fighter jets to make them bulletproof. The result was an impassable, optically transparent, 100 per cent recyclable skateboard.

“It just kind of happened organically,” Alwerud recalled during a recent interview. “We did everything else, so we thought, ‘What else can we try? How about a clear board?’”

After forgetting about the project and having it resurface years later when relocating, Alwerud reclaimed the board and began to use it as his mode of transportation during his college years. The rest, as they say, is history.

Alwerud contacted Leuck, who was studying to become a manufacturing engineer, and the duo began production of the first set of Jelly Skateboards.

Currently, the company sells 500-1,000 units within a three-month time span, but Alwerud is looking to increase that number to 4,000 units.

With several other innovative additions such as BLOCK Risers that allow for a camera mount, light or storage space to be placed underneath the board, Jelly Skateboards is in a position to change the skate industry once again.

Jelly Skateboards is already in some of the biggest retail outlets in the U.S., such as Sun Diego and Blueline Surf and Paddle Co., as well as smaller international stores in New Zealand, Sweden, France, French Indie Islands, Puerto Rico and Saint Lucia. Alwerud is also in the process of talking to buyers from skating giants Quicksilver, Billabong and O’Neill in Australia, where he’s looking to hit the market this Christmas.

RELATED TOPIC: Surfest in Newcastle: In the Water and ONshore Fun For Its 30th Anniversary

“Australia is definitely the next territory we want to hit,” Alwerud said. “For the last three years, we’ve really been hammering at the U.S. market and have made a lot of strides getting into retail stores, but we get online orders and emails from Australia every week. We’ve noticed an uptick in sales in that region.”

While acknowledging international expansion certainly has its challenges—such as the high cost of shipping—Alwerud quickly discovered one of the best ways to grow his brand was through attending trade shows.

In fact, Jelly Skateboards’ presence at the world-famous watersports and beach lifestyle tradeshow “Surf Expo” was one of the main reasons the company initially appeared in international shops.

“You have your product out and there are thousands of people walking by it for three days,” said Alwerud. “All the big influencers are there.”

Alwerud said with Australia and the United States being in two different hemispheres and having opposite seasons, it keeps the surf-and-skate season relevant year-round at a consistent pace. He also praised Aussies for creating the surf-and-skate lifestyle, which has had a big influence on the U.S.

Partnering with Life Rolls On

Jelly Skateboards provides a unique riding experience, as the clear, bulletproof polycarbonate enhances the technical aspects of skating—increased stability, improved durability and functionality. Not only are the boards unique in their design, but BLOCK Risers are another innovation that adds value and intrigue to the product.

Alwerud is the first licensee for BLOCK Risers, a revolutionary skate product that can be used on any and every skateboard. This adds an aspect of functionality to the skateboards, as consumers will be able to slide a GoBLOCK or StashBLOCK into the universal BettyBOX Riser underneath the board.

“Skateboards were just the start of the innovation,” states the company’s website. “We’ve reinvented the way your skateboard accommodates your lifestyle.”

The GoBLOCK mount can have a sports action camera easily attached so riders can film themselves, while the StashBLOCK provides riders storage space for money or keys underneath the board.

In the future, Jelly Skateboards plans to create a light customers will be able to slide into the BettyBOX for use at night, as well as a lock to prevent theft.

“I think BLOCK Risers will be the next big thing because it’s a universal product that works on every board in the industry,” said Alwerud. “This block is ingenious and there are so many more things we’ll come out with that slide into the BettyBOX. Whatever our customers want, we’re going to make. The possibilities are endless.”

But Jelly Skateboards is about more than its product and profits.

Its Indiegogo campaign for the debut of BLOCK Risers is aligned with the foundation Life Rolls On. The non-profit organisation was founded by Jessie Billauer who broke his neck during a surfing accident when he was 17.

The organisation’s mission is providing a way to gather the community and have able-bodied people help out the disabled population. This is intended to allow people to see the inspiring moments that take place so people can appreciate things better in their daily lives.

Over the years, Life Rolls On has educated over 100,000 people on spinal cord injuries and has been named an official charity of the U.S. Open.

Alwerud heard of Billauer’s story years ago when he appeared on a feature surf film called “Step Into Liquid.” He later met a friend of Billauer’s, Ari Hoffman, who recommended Life Rolls On and is now the owner and COO for BLOCK Risers Innovation.

It didn’t take much convincing for Alwerud to join the cause and now 50 per cent of Jelly Skateboards and BLOCK Riser profits are dedicated to Life Rolls On.

“When we started this Indiegogo campaign, we wanted to have a cause behind it because we felt if people are donating to our cause to grow our brand, we want to at least give back to a good cause, as well,” Alwerud explained. “It’s one of the coolest organisations that I’ve ever been a part of.”

What’s next for the company?

Jelly Skateboards continues to innovate the skate industry and is ready to enter Australia. Alwerud is confident the product will appeal to the Australian market for a variety of reasons.

“Jelly Skateboards encompass everything about surfboards and snowboards,” he said. “The way the board flexes is the exact same flow you would see on a snowboard, while the way your body rides with the board feels just like surfing. It’s unlike anything out there.”

“I think Australians would love this board, because they’re very green in terms of the products that they buy and are very conscious of how it’s going to impact the environment,” he added. “Also, [the boards] are clear. No one has really seen a 100 per cent optical clear board before.”