How does IKEA Australia approach sustainability? 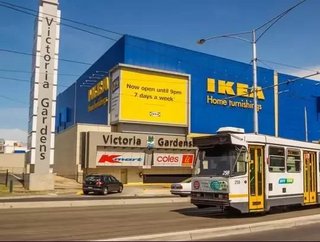 Almost 1% of all commercially harvested wood goes into IKEA products. But it’s trying to change this with an impressive 2020 goal of 100% renewable energy, producing as much as it consumes in operations, and that its wood, paper and cardboard will be sourced 100% sustainably.

Leading the its Australian stores into the future is Dr Kate Ringvall, IKEA Australia’s Country Manager Sustainability, who has had an esteemed environmental career for more than 20 years, including at Local and Federal Government levels.

“Having come from outside of IKEA, I've had a really good insight into what makes us different,” says Dr Ringvall, who relocated from Perth to Sydney in February for the role. “And the key is that sustainability has been at the very kernel and DNA of IKEA since its inception.”

Ingvar Kamprad founded IKEA in 1943 at the age of just 17, with the premise you could do more with less. Now, it serves 915mn customers every day globally, and Dr Ringvall says Democratic Design is part of the core design principle that runs through everything.

“It's about creating products with sustainability at the heart,” she explains. “The five key principles of IKEA’s Democratic Design are form, function, quality, low price – or cost consciousness – and sustainability. Nothing gets produced unless it meets the rigorous criteria that sits within that.”

As well as having key considerations for how and where products are made, and by whom, IKEA also considers what will happen to products at the end of their life, and now recycles all mattresses via social enterprise Soft Landing, which provides jobs and traineeships to help people out of poverty and into lasting employment.

“We’re moving to do the same with sofas and other furniture,” adds Dr Ringvall. “We're in the 21st century and our research shows that people want to live more sustainable lives, but they're unsure how to.

“We can help them to do the small things or swaps, like LEDs, water efficient taps and other sustainable products. It's really simple stuff and doesn't have to be expensive.”

She says one of her goals is to talk about sustainability within IKEA more, adding: “The challenge is ensuring we're using less resources, and reusing as much as we can making products that are not hurting the earth.

“The future means we have to start thinking about circularity. It’s a continual challenge for all companies, but particularly for us, because that's one of things we feel is very important.

Globally, IKEA has invested $2.25bn in renewable energy since 2009 and has committed to investing another $900mn. It also owns and operates 327 offsite wind turbines, and has installed 700,000 solar panels on IKEA buildings.

The store now only sells LED lights, and the renewable SOARE range of place mats, made from water hyacinths in Vietnam and Southeast Asia, are a huge hit. As is Kungsbacka, the new range of kitchen doors and drawer fronts which launched in February, made from recycled PET plastic bottles and reclaimed industrial wood.

“It’s really pushing the boundaries of what sustainable products look like,” Dr Ringvall adds. “It's a funky kitchen front that looks amazing and is made of recycled wood and PET.”

IKEA is also phasing out EPS – oil-based expanded polystyrene – which used to be found in flat packs, and replacing it with fibre-based, fully-recyclable materials.

Another major change is becoming multichannel – being able to order online – and to that end, the furniture behemoth has forged partnerships with Airtasker and GoGet cars. It’s also establishing pick up points and, to date, has 18, mainly in regional centres.

“If you're in far North Queensland, you can order your kitchen online and it will be delivered to your pick-up point in your town,” she adds. “Every store has GoGet cars available, and they’re discounted if you're an IKEA family member.

“Essentially, you can just book a car, go and pick up your stuff, take it home. Then come back, swap your car and that's it. We're connecting with whole other community groups, so our reach is far-expanding. We've opened up how we meet the customer – that's where the future is.”

Urbanisation is another key issue, both here and worldwide. Australia’s population is set to grow from 24mn to 70mn over the next hundred years, and when IKEA Australia shared its glimpse of tomorrow at Sydney’s Millers Point in August, unveiling a co-living community complete with a shared dining space, people were blown away.

The brainchild of IKEA’s innovative future-living lab, Space10, in Copenhagen, Denmark, it also boasted a fully functional Growroom – an open-source urban farm pavilion showing how cities can feed themselves through shared food-producing architecture.

“Space10 is taking some of those concepts and doing lateral thinking about what can be done in smaller spaces,” explains Dr Ringvall. “We recognise we need to live differently and adapt to an urbanised future, and what that might look like.”

The plans for the Growroom, which are available for free, have already been downloaded 20,000 times, and received significant interest from local government, which is desperately investigating affordable, sustainable housing in some of Australia’s largest – and massively overpriced – cities.

“Having worked in local government, where the old saying is ‘the rubber hits the road’, I can vouch for that,” she says. “It absolutely does. We’re going to have less space and Local Government recognises that, and also the fact that so many people are isolated, or lonely – and connection is what they're seeking.

“And it's not just individuals – it's families, couples, multi-family units, school communities and community groups. The Growroom is a connector as well, meaning people can share resources in a way that's really connecting them, and also back to nature.

Tying in to this tangent is Food is Precious, one of the major current global IKEA initiatives aiming to cut food waste, certainly in food preparations, by 50% by the end of 2020.

“It's becoming more of a focus, because of the amount of food that's wasted could, literally, feed the world,” she adds. “We absolutely need to be doing things differently. We have to be innovative and think totally differently to what we have in the past, so we can use less resources, but meet the needs of the people that we want to connect with.”

Dr Ringvall says IKEA “talks the talk and walks the walk”, revealing she finds it inspiring and heartening that the big multinational has held on to some of the quintessential Swedish cultural values.

“Togetherness, working together and caring for each other,” she adds. “Those are really important values that are getting lost. But IKEA employs through its values. It’s a company that immediately saw the level of experience and education that I have, and valued it.

“It’s very empowering and they’re constantly saying, ‘What else would you like to do?’ I've yet to hear someone say, ‘We can't do that’.”