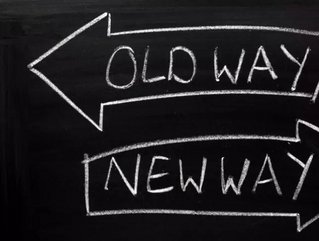 There can be little doubt that we human beings, on the whole, dislike change.
No industry union, for instance, have ever threatened to take strike action until their members annual leave entitlements were not replaced immediately with ‘a bit of a change’. In fact, doing so would probably lead to strike action… or worse.

Nor has any tribe that was forcibly relocated, or village who’s food supply dried up or trade who’s skills have fallen prey to the relentless march of technology ever been heard to utter the words, “Well that was refreshing!”

Even saying the phrase, “a change is as good as a holiday” out loud sounds implicitly stupid. It’s reminiscent of the person who jumps in to a pool of freezing water and then, with chattering teeth claims, “It’s alright once you’re in!”

So why the delusion?

Obviously, the reasons are many and varied, but perhaps the most fundamental and simple is that, whether we like it or not, change is inevitable and it just may be that little “hope delusion” is the sugar that helps the medicine go down.

The problem is, and this is the problem with all delusions, that at some point we wise up and stop believing it. This in turn makes us more cynical, more behaviourally resistant and less likely to be persuaded by further pithy homilies, no matter how well intentioned.

The reason we find change so confronting is most likely anchored in our evolutionary development. Change, it has to be said, has rarely in human history ushered in pleasing results. There is little comfort to be taken from crop failures resulting from unexpected environmental changes and foreign visitors haven’t always arrived for the purpose of free trade and innocent tourism.

And so it is that our default response to change has become both negative and resistant.

Amplifying this problem is the fact that we are living in an age of logarithmic change as unprecedented shifts in technology, our values, the market place and culture have buffeted us with increasing severity since the late 20th Century.

So change is natural and seemingly our reaction to it is also natural and understandable, how is it that we get managing change so very wrong.

Simply put, we try to fight our natures.

Rather than accepting our innate response to change, we try to deny it, force it down or else beat it into submission enlisting short term strategies like motivation and discipline. And when these fail, as they very often do, we beat ourselves and our teams up and double down on the strategies that have just failed us.

So what is the alternative? How might we better facilitate and streamline the process of change so that is more effective, more efficient and ultimately more sticky.

Firstly, we need to stop the delusions and deal with reality.

Change sucks. It just does. Don’t dress it up or tell us how good it’s going to be. For all we know (and all you know for that matter) it might not be as rosy as you anticipate.

Instead we should assume that the process of change is inherently threatening and work with this entirely human response rather than at odds with it.

Firstly, we need to demonstrate what’s in it for them. Clearly there’s something in it for us otherwise we wouldn’t be advocating for the change, but until those we wish to influence understand what they stand to gain, framed in their values, there’s little possibility of enthusiasm.

Secondly, we should assume that the change is perceived as a possible or even a likely threat.  And when our people or customers feel disempowered or unclear, they’ll likely catastrophize  possibilities - all of a sudden, restructures translate to job losses, new management equals new politics, a new competitor leads to the unemployment line. This starts with rebalancing the fear equation from fear of action to fear of inaction - rather than simply demanding change, demonstrate how not adapting to change might be more frightening.

Lastly, streamline the change and reduce the friction involved. In other words, rather than making a new process more arduous that the previous system, make it simpler, use fewer reporting lines or stages and ensure the reasoning and logic behind the change is clear and easily understood.

But perhaps most importantly, make successful change more likely by biasing your systems design towards easy and early wins and through aligning new behaviour with existing behaviour.

The more effortless change feels, the more familiar it seems, the less we notice that it’s actually change.

Published by WILEY, Dan and Kieran’s new book Selfish, Scared & Stupid is available from in paperback RRP $25.95 from www.selfishscaredandstupid.com.