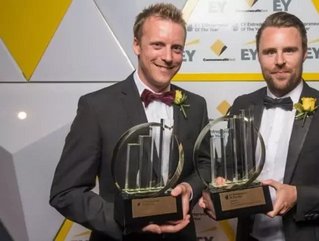 The winners of one of the most prestigious business awards have been announced.

Joe Davenport and Owen Kerr have been awarded the top honour of the 2014 Australian EY Entrepreneurs Of The Year, for their foundation of the online foreign exchange broker Pepperstone. Davenport and Kerr beat out 26 other finalists for the award, and will go to Monte Carlo next year to compete against other national winners in the category for the title of 2015 EY World Entrepreneur of the Year.

Pepperstone is currently in the top 15 among retail foreign exchange brokers globally. The company, which was founded in 2010, has offices in Australia, China and the US, services over 20,000 retail investors in 150 countries and has a huge average trading volume of $3.3 billion per day.

The company grew from each man’s background—Davenport was a trader and Kerr was a foreign exchange broker—and the thought that they could offer a “better broker experience through automation and technology,” said Kerr. One of the companies keys to success is not being afraid to make mistakes.

“I believe that the spirit of entrepreneurialism is being opportunistic and identifying new ways to sell products and build businesses,” shared Davenport. “We looked at the market of online foreign exchange and realised that there was a lot of cost involved and it wasn’t really accessible to the average person. We saw that as an opportunity, so we developed a product, bought it to market and it’s been very successful.”

The judges of the award were impressed by the duo’s commitment to their business.

“Joe and Owen saw an opportunity to transact international exchanges faster and more efficiently than traditional providers. The speed and the volume at which they can transact and the global reach the business now has is impressive. It’s amazing that a business like this comes out of Australia. We should be extremely proud that young entrepreneurs in this country, like Joe and Owen are seeing these types of niche market opportunities, seizing them and creating successful, globally recognised businesses.”

Pepperstone was not the only winner of the night. Below is a list of the other successful entrepreneurs and their companies that were recognized by Ernst Young.

Sponsors of the award include Commonwealth Bank (the principal sponsor) as well as Qantas and The Australian Government.

Michael Cant, executive general manager of Commonwealth Bank, shared his take on the current pool of entrepreneurs in Australia.

“The 2014 EY Entrepreneur Of The Year finalists and winners showcase the high calibre of entrepreneurial ability in Australia, combining impressive leadership capabilities, progressive thinking and strong business acumen. We congratulate everyone who took part in the awards program, especially this year’s Australian Entrepreneurs Of The Year, Joe Davenport and Owen Kerr.”