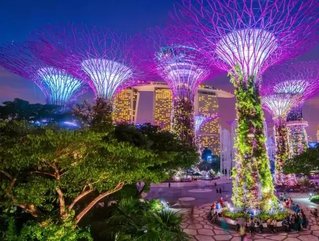 For this month's City Focus, we've taken a look at the city-state of Singapore, traditionally a trading hub and now paving the way for the smart city revolution.

Singapore is a city-state made up of a main island, of which its official capital takes up about 30%, and several smaller adjacent islands. With an area of 716 sq km and a population of about 5.3mn of which 36% are non-Singaporean, the city-state boasts a diverse range of cultures including Chinese, Malay and Indian.

GrabPay and oBike partner in Singapore

Singapore has four official languages, with English being the main language for government and commerce, spoken by 23% of the population, while 35% speak Mandarin, 14% Malay and 3% Tamil.

The city-state’s major trading partners include the US, Malaysia, Hong Kong and Japan, and since it has a lack of natural resources being just 100km from the equator, it has developed mainly as a trading hub. Its major industries nowadays include shipping, banking, tourism, electronics, chemicals and oil refining, according to singaporeexpats.com.

The site also praises the city’s top-class infrastructure, citing the “award-winning Changi Airport” which “provides air links to major cities around the world”. It adds that “the train and subway systems are clean, fast and efficient”.

Singapore is connected to the nearby western port of Malaysia by a 1,056m (3,465 ft) causeway across the Johore Strait.

Singapore is one of the seven ASEAN countries and according to encyclopedia.com, “has played a leading part in this important regional grouping, which has sought to maximise economic growth among its member states, to regularise politics consultation on the part of the constituent governments, and to limit foreign political and military interference in the area”.

The Ministry of Trade and Industry’s 2018 GDP Growth forecast is 1.5%-3.5%, and Statistat says local employment growth is likely to match this.

Singapore is fast becoming known as a major smart city. Savills.com stated that the historic trading hub “has evolved into a modern, cosmopolitan city that is leading the race to become a global smart city”. Savills cites everything from the super-fast broadband network and free public wi-fi to, more broadly, the city’s water management system. The city is also trialling the use of smart products to collect waste and look after the elderly in their homes.

Smart Nation Singapore is a government initiative with the goal of harnessing infocomm technologies, networks and big data to create tech-enabled solutions. It was launched in 2014 by Prime Minister Lee Hsein Loong and for 2017 dedicated $2.4bn to working with the private sector. Rather than awarding grants, it used the money to support tech startups, spurring innovation.

According to the state, “Singapore strives to become a Smart Nation to support better living, stronger communities, and create more opportunities, for all”. The five key domains for the initiative are transport; home & environment; business & productivity; health & enabled ageing; and public-sector services.

The government intends to “look to citizens and businesses to co-create impactful solutions to address our challenges” and “put in place the infrastructure, policies and enablers to encourage innovation”.

So far, milestones for last year included the announcement of the five Strategic National Projects (SNPs), including an e-payment drive, a national digital identity framework, and an urban mobility programme. The Land Transport Authority (LTA) also announced a 55km expansion to the existing 12km autonomous vehicle trial route to include areas like the National University of Singapore. 2017 also saw the launch of AI Singapore, a new national programme to “catalyse, synergise and boost Singapore’s AI capabilities to power our future, digital economy”.

In addition, Singapore was ranked the eighth best city for transport on Arcadis’ 2015 Sustainable Cities Mobility Index. Overall, across categories entitled planet, profit and people, Singapore scored a respectable 62.7, and Arcadis said it has “the best balance” across all three. Under the people category, the city scored 100% for transport and digital applications. Arcadis also said it was one of the safest places in the world to drive or be a pedestrian, with traffic fatalities very low per capita and an overall safety score of 86%. It also scored 100% for encouraging residents to use electric vehicles.

Tim Risbridger, country head for Singapore at Arcadis, told sbr.com, “Singapore ranks as one of the world’s most sustainable cities and its achievements, especially in relation to the encouragement of electric vehicles and its focus on digitalisation, are to be lauded”.

Singapore is currently home to two of Asia’s most valuable startups, tech unicorns Grab and Sea.

According to Tech in Asia, Grab is now totalling $2.7bn in funding and is at its series G stage. The company is a ride-hailing platform, and as such is Uber’s South East Asian rival. Grab was founded in Malaysia but is now based in Singapore.

Started in 2012 by Anthony Tan and Tan Hooi Ling, the unicorn moved to Singapore in 2014 and now serves approximately 156 cities in 8 countries: Singapore, Malaysia, Indonesia, Philippines, Vietnam, Thailand, Myanmar and Cambodia. In November 2017 it reached its “billionth ride” and said it had 2mn driving partners, 68mn app downloads and 3.5mn daily rides.

The company has had investment from big players like Didi and Softbank, who in 2017 led a funding round worth over $2bn.

With $1.4bn funding to date, Sea is at series E of its funding and is a general internet company which owns three distinct brands: Garena, Shoppee and Airpay.

The company itself is named after its operating area, South East Asia, and it employs around 5,000 people across seven key markets.

Garena is an online gaming platform which curates and localises mobile and PC games across seven markets, operating popular games like League of Legends and FIFA.

Shopee is an e-commerce platform tailored to South East Asia, and is the major platform in that region.

This City Focus is featured in this month's Asia edition of Business Chief.