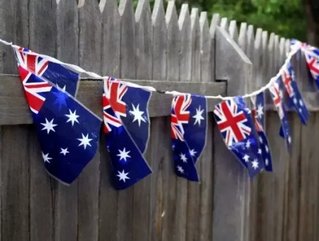 If you’re in Sydney for Australia Day, don’t miss out on the festivities! Check out one—or all!—of these events celebrating our great country.

The iconic Sydney Opera House will host an equally iconic lineup of talent for Australia Day. There will be two free concerts January 26—The Wiggles Australia Day Concert and a show more geared towards an older crowd, The Australia Day Concert. While the Wiggles will absolutely be a big hit, the second concert of the day features acts the likes of Jessica Mauboy, James Morrison, The Veronicas, John Foreman, Sheppard, Russel Morris, Justice Crew, David Campbell. Hopefully you already registered for your tickets, because registration for the concerts is closed.

Family fun is the focus of many of Darling Harbour’s offerings on Australia Day. Like the concerts at the Sydney Opera House, performances are free, but these are open to the public. Circus teams from Circusworks will show anyone interest how to juggle, stilt-walk, hula hoops and walk on a balance beam; performers will share Latin, Tibetan and Indigenous sounds with audience members at the Culture Beats Stage; roving performers and buskers and; a Twilight Concert at Cockle Bay. The day at Darling Harbour accumulates in the NSW Australia Day Spectacular: a dazzling extravaganza of fireworks, digital effects, multi-media and music!

The Rocks is providing just as diverse a line-up as Darling Harbour. Enjoy free music performances by fresh Australian talent, wander the Rocks Markets, practice your croquet skills and count down to Triple J’s Hottest 100 on the streets or take in the stunning vista of Sydney Harbour and the Australia Day Harbour activities.

With plenty of on-stage fun organised by leading entertainment brand for kids and family – Nickelodeon, there’s never a dull moment in the interactive zones set up throughout the park. You’ll find Nickelodeon characters at the meet-and-greet zone, and there are stacks of activities to keep the whole family entertained.