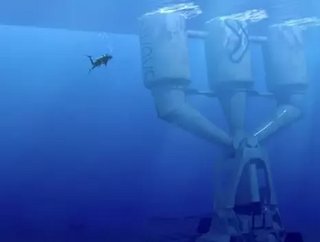 A wave energy project in Australia that intends to help commercialise the technology and eventually power an entire community, is drawing near.

The BioWAVE project created by BioPower Systems will be used throughout the next year off the south-east coast of Victoria in an attempt to gauge the commercial viability of wave power technology.

RELATED TOPIC: Otto Energy looks to cash in on offshore drilling in Philippines

The large 26-metre steel structure will sway back-and-forth beneath the surface of the ocean to create an oscillating motion in the water. This will activate hydraulic cylinders to spin a generator, and the power will be harnessed through a subsea cable to an onshore aquaculture facility. This facility also has the retail power purchase agreement to supply electricity to the national grid.

Since ocean waves are an abundant and reliable source of renewable energy, the development of technology to effectively use this energy could lead to a renewable source of electricity as well as an explosion of employment and manufacturing opportunities throughout the region.

Among the main challenges facing wave power technology is a high setup and high maintenance cost for systems that need to be able to function in rugged marine environments. However, the BioWAVE system gets past this with its ability to lay flat against the sea floor during rough sea conditions.

BioPower has been enhancing the technology for the project since 2006, and the in-depth research and development it has taken shows that new, renewable energy generation ideas require substantial time, effort and funding to operate at its highest potential.

The site of the $21 million project is now in the final stages of preparation for the completed unit’s arrival, as the onshore electrical equipment is in place with divers working on subsea power and data cabling.

According to experts, the completion and usage of this device would be the most important milestone in the development of wave energy technology.