Smart ordering to be trialled at Sydney Hoyts 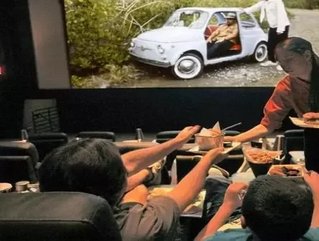 Sydney is having quite a phenomenal week: after becoming the first non-US nation to sample fast food favourite In-N-Out burgers on home turf, the NSW city will also have the opportunity to test out a mobile payment app that allows Hoyts movie patrons to order food and drinks from the comfort of their theatre seat.

The app, a product of Commonwealth Bank and MasterCard called ‘QkR’, combines near-field communication (NFC) technology (which is currently utilised in its Kaching app) and MasterCard’s ‘tap and go’ PayPass.

“We believe that this brings in-cinema dining to the next level,” Hoyts retail, food and beverage director Matthew Ezra told Computerworld. “Currently, you can order at the bar and it gets delivered to your seat but now you don’t need to miss the movie.”

For the next three months, QkR will be trialled by moviegoers at Hoyts La Premiere cinemas in Chatswood and Moore Park. If the test is deemed successful, the app will make its way to Hoyts La Premiere in New Zealand.

“Hoyts has long embraced new technology to give our guests the ultimate cinema experience. Digital and 3D advances have revolutionised the on-screen magic and now QkR will eliminate the hassle of having to leave the cinema auditorium to place another food or drink order,” Hoyts CEO Delfin Fernandez said in a statement.

Currently, the app is only compatible on Android and Apple operating systems. Although MasterCard helped develop the app, Technology Spectator assures that American Express and Visa cards are also acceptable forms of payment.