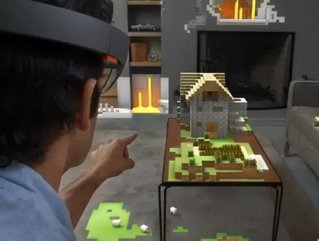 In the world of innovative technology, Apple and Google have been dominating the market. But at Microsoft’s event yesterday—which was advertised as a venue to introduce the next Windows operating system, Windows 10—the long-lived tech company surprised everyone with the introduction of its HoloLens, a holographic-projecting headset known more in science fiction than the real world.

Although it wasn’t known by the media yesterday, this event was a make-or-break one for Microsoft, building a dividing wall between the company’s sluggish last decade of pushing older technology and missing out on newer trends like mobile devices, cloud computing and Internet search and its new innovative future.

“Our industry’s progress is punctuated by moments of category creation,” said Staya Nadella, Microsoft’s chief executive. “Windows and holographic computing is one such moment.”

And those in attendance were inclined to agree with him. Carolina Milanesi, analyst at Kantar Worldpanel ComTech, a technology research firm, believes that HoloLens is Microsoft’s commitment to creating new markets instead of or just protecting old ones. “They’re not just focused on retaining, but developing new opportunities,” she said.

James L. McQuivey, an analyst at Forrester Research, a technology research firm, said that HoloLens has a chance to do what the iPhone did for Apple. “If successful,” he said, “HoloLens will ultimately expand the way people interact with machines just as the mouse-based interface did in the 1990s, and touch interfaces did after the introduction of the iPhone in 2007.”

Highlights on the HoloLens

- Allows interaction with holographic images: people will be able to play video games, build 3D models and hold immersive videoconferences with colleagues
- Can display augmented reality, demonstrated with a version of Minecraft (a popular video game it acquired last year)
- Will be available around the same time as Windows 10, which is expected this year
- No pricing information is available at this time

- Will run on smartphones, computers and Xbox One game console
- Will be offered for free the first year to existing customers using Windows 7 or Windows 8.1
- Cortana, Microsoft’s Siri equivalent, will be available on PCs, not just smartphones
- A new browser: Spartan
- More user friendly that previous PC operating systems