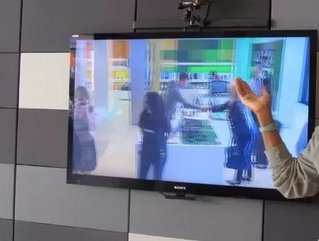 Sony wants you to come and explore and enjoy its newly branded store at the Westfield Shopping Mall in Los Angeles, California. The aesthetically-interesting entrance to the brand new 4,200 square foot Sony store is a long panel of glass that invites customers to enter into the world of Sony, and what a world of Sony it is!

Designed by Klein Dytham Architecture, the store is a bright open space intersected by movable walls that change colors. The modular setup and white space is reminiscent of Apple stores but Sony is differentiating itself by offering an interactive shopping experience to consumers by allowing them to test out a full range of Sony products in-store before buying.

“Sony’s goal is always to exceed customer expectations by providing an exciting, interactive and entertaining shopping experience,” said Phil Molyneux, President and COO for Sony Electronics. “Our new store concept gives shoppers an opportunity to interact with trained and knowledgeable staff as well as preview, test, compare and unlock the full potential of Sony's entertainment offerings.”

The new store is set to serve as a model for future Sony stores as the company strives to compete with major player Apple.

“The new store in Century City is a significant step in building a blueprint for future Sony stores, both in the U.S. and around the world,” said Kiyoshi Shikano, Global Sales and Marketing Officer at the Sony Corporation. “We will gather opinions so that we can continually evolve and improve our retail experience, both here in the U.S. and around the world…Sony Style stores and websites globally will also be transitioning branding from Sony Style to Sony,” Shikano added.

DESIGNED FOR THE CUSTOMERS

The store is divided into Sony showcase areas with tables full of products customers can use and test.  The first section highlights Sony Vaio computers with tables showing off new Vaio products like the touchscreen Vaio desktop and the 3D F series laptop.  Customers can test out different skins and mouses for each Vaio computer to see which one fits their comfort and style level. There are also informational panels with key product information for every product on each table.

The next area is the personal gaming and Playstation section where the most talked about item is the new 3D ray modeler, which now features hand control.  Less cutting edge gamers can play Gran Turismo on PS3 players while watching the action on a Sony 3DTV.

Finding one’s way in a changing store landscape can be challenging, so Sony uses large section signs located at the top of the movable walls.  The company also lists the song title and artist name of the music being played on the bottom of the walls.

Another funky, innovative section is personal audio, featuring the latest Sony Walkman headphones.  Every Sony headphone option is offered for testing and can be plugged into customers’ personal iPods or mp3 players through a set of PIIQ headphones to test differing sound quality.

There are also display tables with vinyl toys for experimenting with the cameras and camcorders. Whether shooting with a simple point-and-shoot camera or a DSLR, the store offers customers the ability to test out each camera’s focus, depth of field, and image quality by previewing the live footage on a computer screen.

WHY DIDN’T APPLE THINK OF THAT?

Other features of the store include the Music Unlimited and Video on Demand, powered by Qriocity on network-connected products as well as the popular e-tablet readers.

Sony hasn’t announced the exact timetable of further openings but promised that more branded stores would be opened worldwide this year.