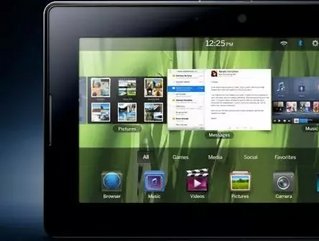 Finally joining its competitors in the race for the hottest tablet, Research In Motion will debut its Blackberry Playbook in Australia on June 20—and it may just be the business executive’s answer to the tablet.

Coming in at 7 x 5 inches and 0.9 pounds, the Playbook is ultra portable and small enough to fit in most coat pockets. It’s also being touted as a real multitasker that provides an excellent user interface. According to its makers at RIM, the Playbook offers “industry leading performance, uncompromised web browsing, true multitasking, HD multimedia, advanced security features, out-of-the-box enterprise support and a robust development environment.” It also features front- and rear-facing cameras, a 1GHz dual-core processor and support for high-res videos and Adobe Flash.

The PlayBook is being commended for external design and screen quality.   It offers apps for the busy executive, including Word To Go, Slideshow To Go and Sheet To Go—and they’re all compatible with Microsoft Word, Microsoft PowerPoint and Microsoft Excel.

It’s also making its mark by being the first tablet in Australia to not feature Google’s Android OS or Apple’s iOS. Instead it’s equipped with the BlackBerry Tablet OS with support for symmetric multiprocessing.

The BlackBerry Store's Australian site says the BlackBerry PlayBook version with 16 gigabytes of storage is priced at A$649, while the 32 GB version is available at A$789 and the 64 GB is sold at A$949. Telecoms Optus, Telstra and Vodafone and electronics retailer Harvey Norman will also sell the Blackberry PlayBook tablet.