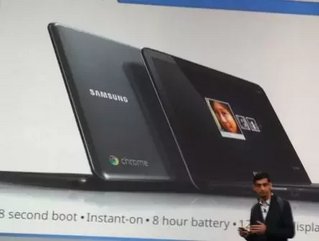 Together with Google, Samsung Electronics has unveiled the first-ever Chromebook, which runs on the Google Chrome operating system.

The Chromebook, set to be available in the US in June, is thin, 12.1 inches long and allows users to do everything on the Internet, rather than locally. Coming in at 3.3 pounds, the Series 5 has a battery life of up to 8.5 hours, including five hours of video play for all-day use.  For US$500 for the Wi-Fi + 3G model, the Chromebook comes with a full-size Chrome keyboard, anti-reflective and anti-glare display and an Intel Dual-core processor.

The obvious downside is that users really won’t be able to do much else than be on online. Apparently, Chrome 12 will offer new offline capabilities like word processing and Google says it is planning more offline improvements in future updates to the OS. “At a fundamental level this is a very different compute model,” Google Chrome senior vice president Sundar Pichai said at the Samsung Chromebook unveiling Wednesday night. “We think it will grow on people over time. The notion that a device can get better over time is something they will get used to.”