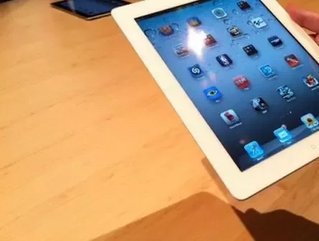 Could it be true? Is the next edition of the popular Apple iPad tablet already in the works? According to the Wall Street Journal, the answer is yes.

Technology giant Apple is reportedly working with Asian component suppliers and assemblers for a trial production for the third edition of the iPad that is said to start in October and launch in early 2012, about one year after the release of the highly coveted Apple iPad 2. The report from the WSJ said that the newest iPad is expected to feature a 2048x1536 high resolution display, compared with 1024x768 in its predecessor, the iPad 2. The report also says that Apple’s suppliers have already shipped small quantities of components for the sampling of the iPad 3 to fit on a new 9.7-inch screen device.

One unnamed Apple component supplier told the US-based, News Corp.-owned newspaper that Apple has already placed orders for parts for about 1.5 million iPad 3s in the fourth quarter.

"Suppliers will ramp up production and try to improve the yield rate for the new iPad in the fourth quarter before its official launch in early 2012," a person at the supplier told the WSJ.

Apple has not yet commented on the new tablet.

In other tablet news, Hewlett-Packard announced last week that it would discontinue production of its webOS operating system, TouchPad tablet and related smartphones, which have not performed well. With Apple constantly innovating, it’s going to be a bumpy ride for other tablet competitors who have yet to dethrone the iPad.