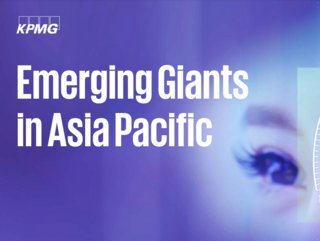 A report from KPMG and HSBC reveals how maturing tech-focused ecosystems in APAC are rapidly producing billion-dollar companies. Here are 10 takeaways

With the IMF predicting that Asia Pacific’s emerging markets and developing economies will grow 20% faster than the global average, this year, fast-growing, influential, and innovative start-ups with unicorn ambitions (Emerging Giants) are a leading indicator of the Asia Pacific's growth trajectory.

That’s according to KPMG and HSBC’s just-released Emerging Giants in Asia Report, which examines new economy businesses across the region with strong potential to impact the global business landscape over the next decade.

"Emerging Giants in Asia Pacific excites us because we see the start-up ecosystem as complementary to the established end of the financial services industry: they're a source of innovation and invigorate both local and regional economies with their dynamism," says Surendra Rosha, Co-Chief Executive of HSBC Asia-Pacific.

Among the characteristics of Emerging Giants: superior technical know-how, expert knowledge of local markets or local customer behaviour, mastery of logistics channels and supply chain operations, successful adaptation of their business models, and a winning culture that attracts and retains talent.

As Darren Yong, head of TMT, APAC for KPMG, explains, Asia Pacific’s emerging giants are bold, ambitious, and cutting-edge in the types of products and services they offer, who they choose to partner with, which markets they target, and in how they shape their business models, company culture and mission statements.

While a repeat of the record-breaking private investment levels in 2021 is unlikely, the first quarter figures for 2022 suggest this year is on target to exceed both 2020 and 2019 funding levels in the Asia Pacific. Australia, Malaysia, and South Korea have already seen deal values pass or nearly pass 2020 totals.

As the world's biggest fintech adopter, the Asia Pacific region has experienced a boom in financial services transformation within the last two years as fintech applications progress in tandem with user uptake. Considerable interest in cryptocurrencies has also led to a surge in crypto financial services providers and blockchain players.

Among the leading 10 emerging giants identified by the report, fintechs and cryptocurrency startups take five of the spots, including the number one spot – Finder, a platform that enables users to compare financial products. Cloud-based payment processing platform Alpha Fintech and GBST Holdings, a financial tech and administration services platform for capital markets, also feature. Healthcare and SaaS startups also feature in the top 10, including AI-based healthcare platform Harrison.ai and SaaS startup Pentana Solutions, an enterprise resource planning services for automotive and distribution spaces.

Growing pressure for an ESG focus in business and investment strategies in order to meet climate targets will likely drive an explosive demand for green technologies and services across every industry, creating significant opportunities for Emerging Giants. In particular, the global push towards carbon-neutrality will be a major driver of innovation as traditional sectors go green, and Emerging Giants will likely play a key role in developing the technologies that can reduce carbon emissions and promote more responsible stewardship of the environment. Asia will be a crucial battleground in the fight for a more sustainable future," says Honson To, Chairman KPMG Asia Pacific and KPMG China. 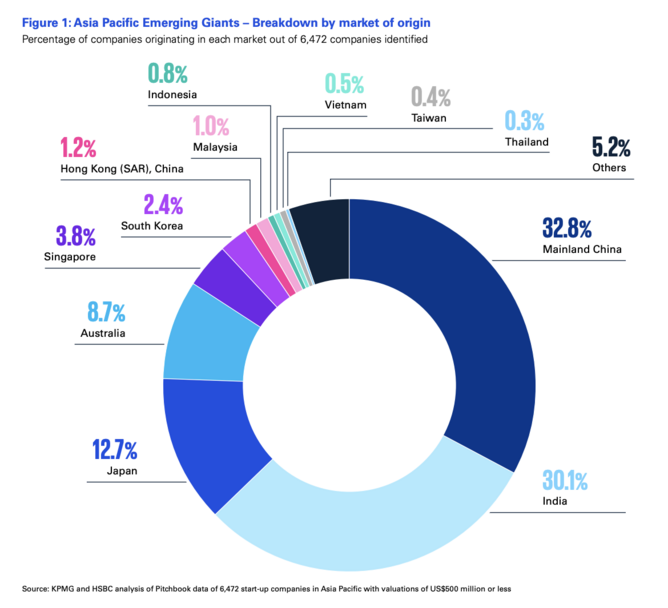 The study identified around 120 technology-related industry subsectors among the emerging giants studied with blockchain-related categories of NFTs and decentralised finance (DeFi) most prominent with over 25% (1,780) emerging giants identifying with those verticals. Blockchain eal estate and decentralised autonomous organisations were also among the top 20 subsector, reflecting the current focus across the region on digital assets, the metaverse and Web 3.0.

After China and India, Australia is home to the largest number of technology startups in the region – nearly 18,000, according to data platform Traxcn. At the top of the current list of eight unicorns is Sydney-based Canva, with a US$40bn valuation. Fintechs account for the largest share of the startups, followed by healthcare, edtech and ecommerce startups. According to Amanda Price, head of High Growth Ventures at KPMG Australia, the pandemic sparked growth in digital startups and it hasn’t stopped.

India had a record year for unicorns in 2021, creating 42, more than in the previous five years combined, cementing its position as home to the world’s third highest number of unicorns and startups, behind the US and China. And in 2022, the country hit a milestone seeing the birth of its 100th startup unicorn.

10 Singapore has highest total of startups in Southeast Asia

More than 9,300 startups and 12 unicorns currently call Singapore home, the highest total of any country in Southeast Asia. Ong Pang Thye, Managing Partner of KPMG in Singapore predicts the entrepreneurial impact of these enterprises to be significant in catalysing innovation here, while also giving a shot in the arm to boost economic strength and market confidence. He says the challenge forward will be to continue attracting unicorns to reside here. Public and private programmes and incentives for hot sectors, as well as an environment that attracts and grooms top talent, will be needed, says Ong. HSBC Singapore says it has seen increased interest in venture capital participation in Series A and B rounds of innovative firms in either B2B software or financial services sectors across Europe and Asia.