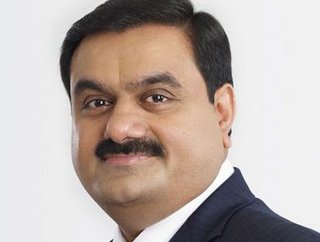 Gautam Adani has become the world's third richest man
The only Asian to crack the top three of the world’s richest, second only to Musk and Bezos, Indian tycoon Gautam Adani has his sights set on green power

Indian industrialist Gautam Adani briefly overtook Jeff Bezos to become the second-richest man on the planet, lagging only Elon Musk, who has a fortune of US$273.9bn.

This momentary eclipse of Amazon’s founder marked the first time someone from Asia has featured in the top three of Forbes real-time billionaire tracker, which has been dominated by US tech titans.

Self-made billionaire Adani, Chairman of Adani Group, saw shares of his conglomerate surge to a record level last week, with shares in the flagship Adani Enterprises, of which he owns 75%, soaring more than 2,700% since March 2020, and doubling in value in the past six months.

This resulted in a significant boost to Adani’s personal fortune, of US$70bn in 2022 YTD, with the Indian tycoon’s net worth surging to US$155.7bn last Friday, up nearly 4%, but now standing at US$153.5bn.

Starting the year as number 14 on Forbes’ real-time data index, Adani has surged up the list over the last nine months, first overtaking India’s Mukesh Ambani, Chairman of Reliance Industries, in February, to become the fifth richest man and the world’s richest Asian – pushing Ambani to eighth place.

Within a few months, Adnani had made his debut as a centi-billionaire – one whose wealth is estimated at more than US$100bn – before surpassing Bill Gates, after Gates announced he would be giving US$20bn to the Bill & Melinda Gates Foundation, and France’s Bernard Arnault in the past two months.

He finally overtook Bezos last week, pushing the Amazon founder down to fourth place, as a renewed tech selloff recently impacted the fortunes of Bezos – as well as Amazon.com Inc. shares being down 26% this year.

Like Bezos, Bernard Arnault, chief of LVMH, has also seen his wealth fluctuate but saw a return to his US$153.8bn net worth pulling him back into second place and forcing Adani down to third.

Building an Indian empire – from ports to data centres

Adani, who has made his fortune in ports and commodities trading, took a punt on Mumbai’s diamond industry in the early 1980s.

In 1995, he won a contract to build and operate a commercial shipping port in Gujarat, which has since grown to become India’s largest port. He then expanded into thermal power generation and coal mining, both in India and overseas.

Adani, who first became a billionaire in 2008, has expanded into everything from airports to data centres, cement to media, infrastructure to edible oils and green energy, cleverly pivoting to areas that Indian Prime Minister Narendra Modi announces as central to the country’s long-term economic goals.

Earlier this year, in May, he took a big step into cement following the acquisition of Swiss giant Holcim’s cement business in India for US$10.5bn.

The conglomerate’s most recent pivot has been towards renewables and infrastructure, with Adani Green Energy – of which Adani is himself a 61% stakeholder.

With India’s quest to become carbon net-zero by 2070, Adani has set his sights on becoming the world’s largest renewable-energy producer by the end of the decade, recently telling a meeting of the US-India Business Council that “cooling the planet down, equitably, is necessary and can be one of the most profitable businesses over the next several decades.”

Last year, he pledged to invest US$70bn in renewable energy projects by 2030 and recently announced plans to build three giga factories to manufacture solar modules, wind turbines, and hydrogen electrolysers, “leading to one of the world’s most integrated green-energy value chains.”

The factories will help generate an additional 45 GW of renewable energy to add to Adani group’s existing 20 GW capacity, as well as 3 million tons of hydrogen by 2030.

Adani has recently earned investments from firms including Warburg Pincus and TotalEnergies SE – which have helped his company shares surge, and subsequently his personal net worth skyrockets.

This comes amid criticisms of greenwashing, as the conglomerate continues to ramp up coal imports in the wake of India’s own energy crisis.