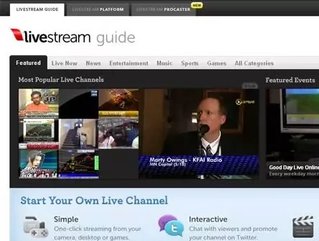 One of the greatest things about the Internet is its ability to bring people together. Sure, that sounds a bit simplistic and hokey, but it really is true! No matter where you’re located on this great big planet, the World Wide Web can help you share connections with other humans.

Hands down, one of the best Internet innovations is the integration of live video streaming. Web streaming allows audiences to connect in ways that the average viral video just can’t match. Sure, you can share a hilarious kitten video with all your Twitter followers, but that doesn’t compare to the capability to simultaneously watch and discuss a live global event like the Royal Wedding or coverage of an election.

When it comes to branding, live streaming can join companies with their target audiences through real-time collaboration, engagement and discussion.

The web is swimming with platform options, but here are a couple of video streaming sites that are particularly savvy and partner-friendly:

YouTube basically rules the Internet’s video market and often sets the pace for advancements, but the site did not introduce live streaming capabilities to users until April of this year.

In the past, YouTube has streamed popular live events like concerts at Madison Square Garden, Obama’s first interview after his State of the Union speech and the first match of the 2010 Indian Premier League cricket season, drawing in big-time sponsors like American Express and Vevo.

The YouTube Live homepage clearly displays videos currently streaming as well as featured events that have recently broadcasted or will be streamed within the next week.

A chat module feature allows viewers to ask questions and partners to respond over a live feed.

After some monitoring and refining, YouTube Live may become available to all YouTube partners in the future.

Livestream isn’t quite as high profile as YouTube, but it offers impressive options to users in accordance with its mission to “build a next-generation live cable operator” and doesn’t require proof of popularity to get started.

With a Livestream free channel service, users and brands can stream standard quality video with Livestream’s standard features and the appearance of Livestream ads on the channel page.

By upgrading to a premium channel, users are able to stream widescreen, HD quality videos with their own advertisements or no ads at all. Similarly to YouTube, Livestream premium provides access to analytics, advanced privacy features and premium terms and support.

Through its “Zero Tolerance on Piracy” policy, Livestream has committed to monitoring copyright infringement and illegal pay-per-view, donation and subscription schemes.

In 2009, Livestream introduced Livepack, an incredibly novel hardware solution which it has described as a “satellite television truck in a backpack.” Livepack allows users to record and stream HD quality footage through a built-in wireless connection with the push of a button.

Sometimes it’s just not possible to be front and center for the world’s biggest events but that doesn’t mean you have to miss out completely. YouTube and Livestream grant you access to the real world in real time wherever you plant your computer screen.