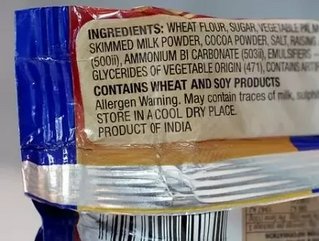 The Super Sandwich Cream Cookies are leaving a dissatisfying taste in Australia’s mouth as they are not exactly made in Australia as the brand name and label implies.

Melbourne company Ozdownunder’s logo pairs a koala with gum leaves and the Australian flag prominently on the front of the wrapper, but hiding below the plastic flap is the truth:  Product of India. The import of these biscuits has been banned at the request of the Australian Competition and Consumer Commission, according to The Daily Telegraph.

Independent Sen. Nick Xenophon is a campaigner for truth in labelling and complained to the ACCC after noticing the elusive origins of the product that Former Burnside Councillor Jim Jacobson brought to light. Jacobson purchased the imported biscuits before realising it was not an Australian-made product, though, from an Australian-owned company.

Last month, the Federal Government rejected review findings that suggested truth “in country labelling.” Xenophon is planning to introduce a private member’s Bill that will overhaul the laws.

"This case highlights the urgent need for better Country of Origin labelling laws," Xenophon said. "I welcome the ACCC's actions to stop the misleading labelling by Ozdownunder, but the ACCC should have prosecuted this company to send a strong message to others doing the same thing. Every time foreign goods are passed off as Australian products, it costs Australian jobs."

The use of Australian logos is allowed, according to the current consumer law; however, they must not ``convey or contain a false, misleading or deceptive representation."

A letter from the ACCC to Xenophon states Ozdownunder agrees to:

"The ACCC shared your view that the logo used on the packaging of the cookies could mislead consumers into believing that the cookies are a product of Australia," according to the letter.