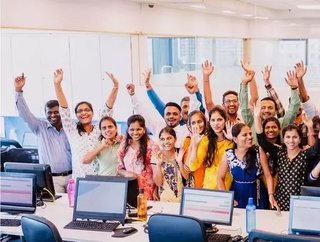 It’s little surprise to discover that the fastest growing companies in India, as recognised by the recently released Deloitte Technology Fast 50 India programme 2020 are those in the fintech, transactions and analytics space. In fact, four of the top six companies, which have been ranked on their revenue growth rate over the past three financial years, are fintechs.

Proof indeed that digital lending in India is on the up. A reflection of the country’s aspirational mindset, digital lending grew 13x to 70x between 2018 and 2020, and according to a BCG 2018 report, has the potential to become a US$1 trillion opportunity by 2023.

And it is the city of Bangalore, otherwise known as the Silicon Valley of India, that is giving birth to the most successful tech startups, including fintechs, with Bangalore representing 18 ranked companies in Deloitte’s Top 50 including four in the top 10.

Here, we chart the top 10 fastest-growing tech firms in India.

A Microsoft Ventures accelerator alumni, cloud-based security company InstaSafe Technologies has become India’s fastest-growing cybersecurity startup, with 574% YOY growth. Dedicated to securing businesses and simplifying the challenge of access from anywhere with a hyperflexible, scale as you go solution, InstaSafe’s incredible growth story is testament to the fact that security has started being taken seriously by CISOs. Founded in 2012 by Sandip Panda, and backed by seasoned investors, including incubators like IBM and Oracle, InstaSafe serves customers across 20+ countries, from Governments and enterprises to leading startups.

Unveiled in 2015 by self-styled techie Pravin Prasad (CEO), software development firm AeoLogic has grown to be one of the most trusted digital transformation companies in India, known for working creatively to connect businesses to the tech resources they need, and in particular a company’s communication internal, external and operational communication systems. As experts in emerging technologies, and with a young, dynamic team of more than 70, AeoLogic has helped some 700 clients, both established brands and fast-growing startups, boost ROI targets and claim 96% customer retention.

A product of SaaS Labs, one of the fastest-growing SaaS companies in the world, cloud phone system JustCall is growing 20-25% month on month, reaching US$5.8 million in revenue last year. Founder Gaurav Sharma, a serial entrepreneur who has launched four businesses, the last of which was acquired by the New York Times, credits the success of JustCall to the organic move by SMEs towards automation and to the platform’s customer-centric approach. Launched as a web-based VoIP software in 2016, over the years, JustCall has evolved into a complete cloud telephony and workflow automation platform, and now boasts 2,000 customers, including Grab, Walmart, Jaguar, Alibaba and EY.

With headquarters in India, Singapore and the UK, IT consulting and services firm Sankey Solutions utilises a unique talent mode and mature learning ecosystem to offer advanced software solutions, data engineering solutions and analytical solutions. Started in 2015 by Suhas Patil, who has 15 years of experience consulting with multiple Fortune 500 firms, and software engineer Sandeep Patil, Sankey has grown from just four people to more than 100 and witnessed 300% YOY growth. The company credits such growth to its next-generation tech lab with a solution mindset philosophy, which leverages a unique learning approach, young talent, new-age technologies and data capabilities to solve business problems.

Dual-based (Pune and California) global industrial IoT solution provider, Infinite Uptime, uses advanced AI and machine learning on the cloud to remotely diagnose and predict problems with machinery. Founded in 2015 by Raunak Bhinge, an alumnus of IIT-Madras and University of California, the firm estimates that there are 100 million high-cost pieces of machinery across India requiring continuous monitoring. And in just five years, the platform has secured more than 200 customers, including Siemens, Daikin and Tata Steel; monitored 75 million running hours of equipment; and delivered more than 10,000 actionable insights to its customers. The firm recently raised US$5.15 million in series B funding.

Focused on fintech innovation in the payments space, Cashfree processes online payments for thousands of Indian businesses, including Zomato, Cred and Zoomcar. In just five short years, the startup, founded by IIIT Hyderabad alumnus Akash Sinha and IIT Kharagpur graduate Reeju Datta, has grown to enable 50,000 businesses in India to collect and send money via more than 100 payment modes with a single integration and as of March 2020 had processed more than US$12 billion annualised payment volume. CEO Sinha credits the firm’s success with its focus on fintech innovation and strong partnerships including its recent partnership with PayPal to enable international payments. A recent investment of US$35 million from Apis is set to help Cashfree accelerate its already rapid growth.

A specialist in advanced analytics, big data and cloud technologies, DataBeat uses an AI-powered data-driven approach to uncover insights long hidden in data to help solve client problems. Started in 2018, DataBeat fuses the expertise of its founders, digital media expert Ashok Ganapam (previous global head of business development and yield at Reuters.com) and data science engineer turned consultant Pratyush Mulukutla, to offer enterprises of all sizes and shapes, from media to tech, solutions to harnessing the potential of their data assets. DataBeat has grown quickly in just three years, reaching more than US$2 million in revenue, and forming strategic partnerships with two of the Big Four consulting firms and alliances with certified partners of Microsoft and Tableau.

Dedicated to digitally empowering the under-served, fintech ROINET Solution provides access to banking and other financial services for individuals living in India’s rural areas. Started in 2012 by Sloan fellow of MIT Sameer Mathur, ROINET employs 200 employees and currently operates in 3,373 cities across 643 districts. Credited with being India’s largest and most trusted rural-focused financial services company, trusted by a number of large national commercial and regional banks, it has created a strong pan-India network of 108,000 customer service retail points (CSP) and claims to have improved the lives of more than 2 million citizens.

The largest and fastest-growing consudmer lending fintech firm in India, ZestMoney targets the 300 million households who cannot access traditional credit and enables purchases by offering transparent instalment options, an approach that eliminates the need for a credit card or credit score. Founded in 2016 by Lizzie Chapman (CEO), Ashish Anantharaman (CTO) and Priya Sharma (CFO), who were colleagues at UK-based finance firm Wonga, ZestMoney has built a platform that integrates mobile technology digital banking and AI, enabling people to apply for a Buy Now Pay Later credit line in seconds.

Having scaled operations significantly over the last three years, ZestMoney has partnerships with more than 3,000+ online partners from the ecommerce, travel and edtech sectors, including Amazon, Flipkart and Apple, as well as being available at 15,000+ offline stores, and claims to have 6 million registered users with more than 70% of customers based outside Tier 1 cities. Last year, the firm was awarded a Technology Pioneer by the World Economic Forum for its work on making affordable digital finance accessible.

Online gold loan platform Rupeek Fintech has become known for bringing an ‘Amazon-like experience’ to the Indian gold loan market. Founded in 2015 by CEO Sumit Maniyar, previously an equity research analyst at JP Morgan, as an asset-backed lending marketplace, Rupeek identified a key issue of availability and accessibility to credit to the self-employed and bridged the gap in the lending market at a lower cost by leveraging tech.

By offering ‘doorstep gold loans, Rupeek has turned a family’s dormant asset (gold is popular with India’s middle classes as a way of saving and investment) into an easy way to get a loan at affordable rates. Having raised US$60 million in two rounds of funding, Rupeek has grown quickly over five years and is now valued at US$300 million with 1,300 employees and presence in 20 cities. Rupeek plans to provide accessibility of credit to a billion Indians by 2022 across 100 cities through its asset-based offerings.