The Year of the Sizzle 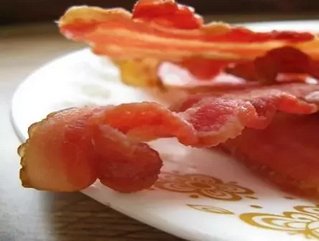 To state the obvious, bacon has worldwide status. Before I first moved to Australia in 2008, I wasn’t quite aware of its cult-like following, merely enjoying it as an occasional accompaniment on my breakfast plate.

Now, I can’t order a meal without it, even if that means requesting it as a side dish to a yoghurt parfait, a bowl of soup, or – let’s be quite honest – a BLT that really requires more B than L or T.

“I was totally a bacon fan before coming to Australia,” said Brooke Shoenman, an American writer now living in Sydney. “Dear God yes, bacon has been a huge part of my food life.”

While this year is the official “Year of the Dragon,” suggesting that everyone born under this lunar zodiac will be rewarded with riches and intelligence (but the world will be plagued with more bad weather and frequent earthquakes), some media outlets are suggesting that bacon – a.k.a, The Pig – may actually be this year’s trending celebrity.

·         In the US, fast food chain Jack in the Box introduced the bacon milkshake with the campaign slogan, “If you love it so much, why don’t you just marry it?”

·         A recent University of North Carolina study published in the UK’s Telegraph newspaper said that choline – a micronutrient present in both eggs and pork products – is a vital supplement in the development of memory and recall in babies’ brains while in the womb. “We may never be able to call bacon a health food with a straight face, but [similar studies] are already making us rethink what we consider healthy and unhealthy,” said Dr Gerald Weissmann, editor-in-chief of the Federation of American Societies for Experimental Biology journal (who published the research) to the Telegraph.

·         In Australia, in an effort to “Aussify” a new Carnival cruise line launching in Sydney Harbour this October, the crispy bacon adored by many North Americans has been chucked in favour of the chewier Australian variety.

“When we talked to over 10,000 Australian and New Zealand guests that had sailed on Carnival Cruise Lines in the Caribbean and Mexico… the top three things that [they] asked us to change was our tipping policy, the coffee and bacon,” said Jennifer Vanderkreeke, Director of Carnival Cruise Lines Australia. “To Australians, American bacon just isn’t bacon. The high fat content and crispiness are not appreciated.”

The fat content exemplifies a cultural difference between North American and Australian bacon, and for some North American enthusiasts, the lack of fat is a real deal breaker. Ophelie Lechat, a Canadian native who now lives in Melbourne, dearly misses the North American-style bacon that is more easily fried to a crunch. “The closest I can find here to Canadian bacon – or back bacon, as it's called in Canada – is thickly-sliced pancetta,” said Ms Lechat.

Another ex-pat Canadian, Larry Colwell, is in agreement with Ms Lechat – so intensely so, that he has resorted to curing, smoking and slicing his own bacon. “Because the bacon is usually middle cut with some of the eye left on, I would say the Aussie bacon is similar to Canadian back bacon, but with 80 per cent less flavour,” said the Victoria-based pork lover, who sells his pork belly strips all over Australia.

Regardless of preference, bacon aficionados will gather across Australia this month for the continued International PorkFest (25 March – 28 April) which will feature a variety of pork-inspired dishes at select restaurants. “The International Festival of Pork celebrates a seasonal abundance of pork,” said Australia Pork Limited (APL) CEO Andrew Spencer in a media release from last year’s event.  “There’s plenty of it, it’s excellent quality and affordably priced.

“April will be like going on a world tour while staying in Australia and having your porcine passport stamped in the most delicious way.”

A most delicious way.