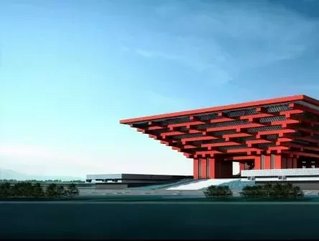 The former architecture student with a penchant for taking pictures was in the city to check out the Shanghai World Expo, the biggest cultural event of its kind that lasted from 1 May – 31 October, 2010. Themed “Better City, Better Life,” the city played host to 73 million international visitors on a 5-kilometre plot of land alongside the Pudong River.

Over the course of 184 days, 84 pavilions were on display to showcase the diverse cultures and archaeological designs of 214 total nations, offering a vast collection of regional artefacts from around the world.

“All the architects received the same design brief, and from it, 84 different interpretations were created,” Katarina, 34, said. “Normally, just one building is [constructed] from a brief. It was fascinating.”

It is these designs that are now showcased within the pages of The Unbeatable – Contemporary Masterpieces, a 480-page coffee table-style testimonial to the unique cultural legacy left behind by this quinquennial event. The book was created by REVEALbooks+fotos, the publishing company founded by Katarina and her parents, Monika and Detlef Stuebe.

“From the moment [they] explained their idea, I was sure that it would become a great book for all the people like me who were closely involved with the Expo,” said Igor Peraza, Director of the Barcelona-based architect firm Miralles Tagliabue EBMT and whose Spanish pavilion is featured in the book. “It is a very important archive that explains the biggest Expo in the world and contains great personal memories.”

It was the legacy of the Opera House Asian book tour that originally brought Katarina to Shanghai, and as she watched the pavilions grow from humble frames to incredible architectural works of art, a familiar thought dawned on her: “This should be documented.”

And so began perhaps the biggest undertaking in REVEALbooks+fotos’ brief history.

By mid-April 2010, Katarina realised this was no longer a project she could complete on her own. Monika flew out to help, catching the last flight permitted to leave Frankfurt Airport before the Icelandic volcano cloud halted air traffic across Europe. From then until 1 May, Katarina and Monika worked 12-hour days: snapping photos, developing film, and speaking with the architects and designers spread across the five kilometre site.

Though the work was tiring, the experience was beyond exhilarating for the mother-daughter duo. “There was this crazy, amazing energy – you could feel it everywhere,” Katarina said. “Everyone wanted a photo of their pavilion being erected.” Over the course of the six month Expo, Monika, Katarina and Detlef captured the excitement of the event through their lenses. Detlef personally visited and documented 51 pavilions inside and out, compiling information about each of them. At the time, he didn’t know that all this would become part of a later publication.

By the time the REVEALbooks+fotos trio had a chance to sit down, sort through all the images and research more about the pavilions after the Expo, they discovered that information was fading out: some of the websites were not updated or had been taken down altogether, and several architects had not responded to their pavilion questionnaires, leaving them to fill in the blanks. They briefly considered producing a limited e-book about the event, rather than a hardcover volume, but eventually settled on a concept similar to that of the Opera House book.

“In this brainstorming process, the idea arose to include essential facts, in addition to architectural and design material, aside our own images and stories,” said Detlef. “We made some test calls to architects, [and] the results were so overwhelming; [they] gave us the boost for a go.”

The book, which launched in late March, initially caught the attention of Rob Steinberg, a prestigious American architect with a portfolio of accomplishments from around China. He met Katarina through a mutual friend during one of his most recent trips to Shanghai and was bowled over by the incredible quality of the book’s contents.

“I thought [the book] was fabulous,” Mr Steinberg said. “It’s incredible that she put this together and worked herself into a position where she was the official photographer. That shows a lot of entrepreneurial effort.”

Having visited the Expo a number of times during different phases of its development, Mr Steinberg commended Katarina’s ability to document the event through the eyes of an architect.

“I’m not sure everybody understands the depth of thinking some of these architects put into their projects, [but] she really looked at the whimsy; she looked at the level of thinking [and] got the back story of each designer and photographer,” said Mr Steinberg.

A quarter of the way through his initial flip-through of the book, Mr Steinberg paused and looked up at Katarina. “Listen,” he said, “The first 10 copies – sign them and I’m giving them to my 10 best clients around the world. I think it’s an extraordinary effort.”

The Unbeatable – Contemporary Masterpieces officially debuted in Shanghai on 27 March and will make its journey around the Asia Pacific region and globally over the next several months. For the authors, the finished book is not only a testimonial to the works of art produced by 84 countries’ architects, but to the overall experience of REVEALbooks+fotos being a part of the Expo.

“It has been an incredible experience taking part in such a historical event like [the] Shanghai World Expo and receive the feedback from architects and the 'Expo Family',” said Monika. “Now that they have seen the book, [it] makes every single moment worth the effort. It is the most beautiful reward, seeing people's eyes light up, delving into their Shanghai World Expo memories.

“We hope to reach many people with our book, to reunite and to keep the memories of The Unbeatable Shanghai World Expo alive for decades to come.”