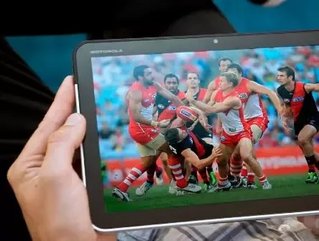 Pay-TV provider Foxtel has the rights to show every home and away game of the season live except the grand final, while Seven Network affiliate Channel 7 will broadcast four games per week. The AFL channel will run throughout the duration of each football season. All matches on Foxtel will be uninterrupted, siren to siren in each quarter, and shown in high definition. The Seven Network is yet to decide if its matches will be shown in HD.

The agreement was announced on Thursday at AFL House, and will deliver $1.253 billion to the League, up from the $780 million in the previous broadcast deal. “Combined with the agreement with Telstra for online rights, officials including AFL Chief Executive Officer Andrew Demetriou negotiated the sport’s biggest broadcast deal as the league moves toward an 18-team competition from 2012 with the addition of a club based in western Sydney,” according to Bloomberg.

AFLPA CEO Matt Finnis said, “The work that the AFL has done in shepherding the game to the point where it can command this kind of commitment from broadcasters should not be understated.”

The new contracts could mean bigger paychecks for the AFL’s 800 players, too. In their Collective Bargaining Agreement negotiations, the players told the league they want a fixed 27 per cent cut of all future revenues. This could be up to $220 million.