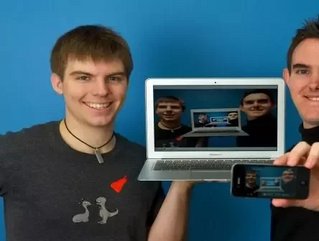 Social media users have a lot of outlets to use when it comes to voicing an opinion, sharing information or promoting a product, but one tool lacking on many of these platforms is the ability to communicate over video.

Enter: Kondoot, the Australia-based social service that has equipped the world with its first social network platform that incorporates live video broadcasting.

“You have services out there now where you can view live videos, view recordings and talk with your friend, but we wanted to create one combined platform where you could do all of your communication in one place,” said Mark Cracknell, who officially co-founded the website with fellow University of Queensland student Nathan Hoad last May.

Kondoot provides a full sensory social experience that combines the features we love from sites such as Facebook, Skype and YouTube. Users can speak their mind over video – streaming the broadcast to just a few friends or across the 137 countries that currently host the service – and engage with these viewers by chatting simultaneously.

“You [have] all these social networks with your friends: chatting, messaging, video calling,” said Mr Cracknell. “You can jump online and start a video broadcast to anyone in the world.”

Not only can you broadcast to anyone in the world, you can shoot your video from anywhere: Kondoot is available as a free app through the Apple Store and Android’s Google Play marketplace.

While this is a great tool for socialising outside the workplace, Kondoot is also appealing to the enterprise market as a way for companies to promote products and brands through Kondoot’s ‘Pages’ feature, hold digital seminars, and directly broadcast messages to out-of-state and international offices. One sector the Kondoot founders are really focusing on is paid broadcasting. Specifically, they’re targeting Australia’s music scene and the potential for their technology to stream live festivals to music lovers around the world. By charging a small fee for the live stream, Kondoot would provide all the logistics behind the broadcast and allow viewers to experience the festival from home – an exciting prospect as Australian festival ticket prices remain at an all-time high.

With plans to expand into the US and Europe via New York and UK-based offices, Kondoot is well on its way towards international growth. Since the original idea was thought up back in 2010, Kondoot has raised $800,000 from primarily Australian investors and another $3.2 million from US-based companies. Now, to help fund its expansion efforts, Kondoot has filed a prospectus with the Australia Securities and Investments Commission to raise an additional $10 million.

Some publications have drawn parallels between the Brisbane-based pair and Facebook’s Mark Zuckerberg and Eduardo Saverin, but competing directly with the social media giant has never been the goal of Kondoot. Rather, “we saw this niche market: a combination of live video and the social side, that no one was doing,” Mr Cracknell said. “Where people want to take Kondoot is where it’s going to go.”