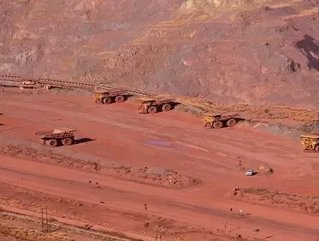 Already at five driverless trucks at the Nammuldi mine, five more are scheduled to arrive on site within the next few weeks, and another three trucks are being assembled for Hope Downs 4.

According to Rio’s Pilbara operations president Greg Lilleyman, the latter site will eventually operate up to 19 autonomous trucks.

Not to be outdone, BHP Billiton is reportedly also running a trial project in the Pilbara with its own fleet of driverless trucks after announcing its plans last November.

“We are now setting up our Jimblebar autonomous trial, that's now moved into execution, we will have 12 trucks in a production environment running the Caterpillar autonomy system combined with the caterpillar fleet management system,” said Tony Ottaviano, BHP’s Vice President of Iron Ore Projects.

"Autonomous haulage is an important component in our Mine of the Future programme. These new trucks will work with our pioneering Operations Centre that integrates and manages the logistics of 14 mines, three ports and two railways. They will be a critical part of our drive to outstanding safety and production efficiency as we grow our business towards 353 million tonnes a year,” said Rio Tinto Iron Ore chief executive Sam Walsh in a media release last July when driverless trucks were introduced at the Yandicoogina mine in WA.

"The Mine of the Future and technology program in the Pilbara is really focused on improving our cost competitiveness and efficiency," Mr Lilleyman said to ABC.