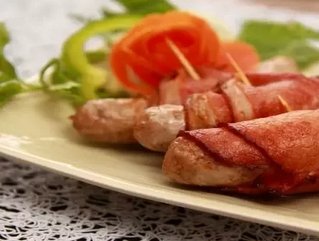 Since partnering with Middle Eastern airline Emirates, Qantas has removed all pork products from its in-flight menu on Europe-bound routes.

These routes often stopover in Dubai, where a majority of residents are Muslim and the consumption of pork products and alcohol are strictly forbidden in Islam.

The flights will instead feature a traditional Middle Eastern mezze plate to upper class passengers, and onboard announcements will be spoken in Arabic.

''Qantas in-flight catering often reflects the cultural and regional influences of the international destinations we fly to,'' a Qantas spokesperson said.

''On flights to and from Hong Kong and China our menus include regionally inspired dishes such as stir fries and to Singapore we have noodle options.''

Qantas offers similar fare restrictions on its routes to Jakarta, Indonesia, which also has a large population of Muslim residents.

Virgin Australia is also onboard with the pork-free menu on its routes into and out of Abu Dhabi, ensuring that all meals are prepared in accordance with halal standards.