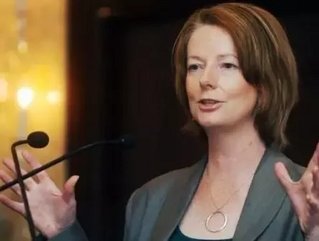 Excerpts from her speech notes, which were released earlier to the media, express that a “tough and necessary” spending cut is needed to help offset the lower economic revenues caused by the mining boom’s impending peak later this year.

"This year we will make the tough, necessary decisions to ensure our medium-term fiscal strategy is delivered, and our centrepiece plans for Australian children and Australians with disability are funded, in this new low-revenue environment," Ms Gillard is expected to tell the National Press Club, as reported by the Herald Sun.

Her speech will also mention the cease of concessions enjoyed by Australia’s upper middle-class and wealthy voters that are currently funded by the Labor Government.

''The dependent spouse tax offset, the tax breaks for golden handshakes, tax concessions on super for high-income earners, the millionaires' dental scheme and fringe benefits loopholes for executives living away from home … all gone,” the Sydney Morning Herald excerpted.

Job creation on Australian soil, winning business deals abroad, and harnessing the ‘Asian Century’ are also said to be focal points of her speech today.

"We can and must focus on increasing skills, building a national culture of innovation, rolling out the national broadband network, investing in infrastructure, improving regulation and leveraging our proximity to and knowledge of a rising Asia into a competitive advantage," her speech is reportedly expected to say.