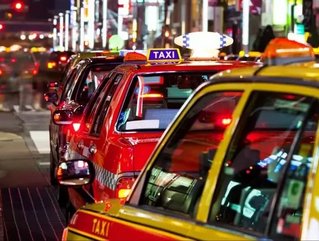 Japan is something of an underdeveloped market for ride-hailing, but that may be on the cusp of changing.

Chinese transportation company DiDi, for instance, just announced a trial of a premium transportation service, ferrying passengers about in Tesla Model S, Mercedes Benz S-class and Lexus LS vehicles. It’s mode of transport befitting the formality of Japanese taxi drivers, who tend to wear uniforms and gloves. According to CNN, DiDi is overcoming the inability of gloved drivers to touch phone with a new voice control feature on its app.

Didi already operates in Japan, beginning in September of last year thanks to a joint venture with SoftBank called DiDi Mobility Japan, but only in Tokyo, Osaka, Kyoto and Nagoya. Though Uber does operate in the country, it is in collaboration with local taxi services owing to a law preventing private car owners from carrying passengers for fares. Nevertheless, the service operates in 14 locations including the obligatory Osaka and Tokyo.

A report from McKinsey last year referenced the unique market inspired by the law, saying: “By forming partnerships, mobility players can initially develop use-case-driven solutions that solve specific transportation challenges for people and businesses in Japan. The expansion of such partnerships into ecosystems could ultimately unlock significant benefits”.

Singaporean ride-hailing giant Grab only recently began operating in the country, albeit in a similarly roundabout way, and exclusively for users from Indonesia and Singapore. Local competitor JapanTaxi has the largest share of the market and operates in the most locations. Even electronics giant Sony has been inspired to join the melee for potential passengers with S.Ride.

The necessity of improved transportation is being re-iterated by the upcoming Tokyo Olympics and the influx of athletes, not to mention spectators. Taking place in July and August, some 600,000 people are expected to attend, representing a blossoming market, without taking into account the associated tourism drive. The government expects to attract 40mn people spending ¥8trn in 2020.