iPad Mini Expected to be Introduced Next Week 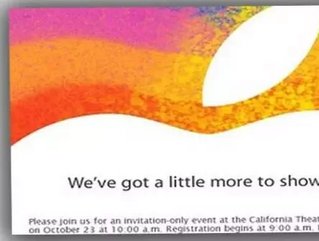 October 17 has come and gone with no unveiling of a mini iPad as NBC News predicted earlier this week, but Computerworld Australia has revealed details of an October 23 (US time) media event in San Jose where Apple hinted they “have a little more to show you.”

For the first time in seven years, Apple will host an event at the California Theatre – the venue where products including the iPodPhoto, special edition U2 iPod and the video iPod were first introduced. The iPhone 5 launch, requiring more space for an eager crowd, took place in San Francisco.

“The media invitation comes at a time when the iPad mini rumour mill is in overdrive,” wrote Computerworld Australia’s Ross Catanzariti. “Among the features expected to be seen on the iPad mini include a smaller 7.65 inch screen, a display with a 16:9 aspect ratio and a resolution of 1136 x 640, the smaller ‘Lightening’ connector, and the same A5 processor used in the iPad 2.”

Microsoft’s launch of the Surface Tablet earlier this week has only added fuel to the rumour fire that the iPad mini’s unveiling is coming, but GeekWire said the new Apple product would compete more closely with Amazon’s 7-inch Kindle Fire and Google’s Nexus 7 over the larger Surface.

The mini iPad is expected to be priced between US$199 and US$299, according to Reuters.