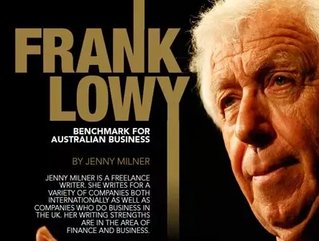 Written by Jenny Milner
Jenny Milner is a freelance writer. She writes for a variety of international companies, including those who do business in the UK. Her writing strengths are in the area of finance and business.
When it comes to business, Frank Lowy is most definitely a heavy-weight. This Australian-Israeli entrepreneur ranked number one in the BRW Rich 200 List of Australia’s wealthiest people in 2010.

Born in 1930 in what is now the Czech Republic, Lowy is arguably one of Australia’s most famous adopted sons. His wealth runs into the billions - in 2011, the business magnate’s fortune was said to have reached $1.75 billion.

Lowy has made his mark in business across the UK, New Zealand, Australia and the U.S. with a phenomenal 119 shopping centres. He opened his first mall in Blacktown, a suburb just outside of Sydney, in 1959 with business partner John Saunders.

Saunders was another Hungarian immigrant, whom he had met in 1953. Together they founded Westfield Group and by 1977 they had expanded in to the U.S. market. In 2004, they became listed on the Australian Stock Exchange.

In 1987, Saunders sold his portion of the business and Lowy was left to go it alone. Shortly afterwards, he developed malls in New Zealand before opening Westfield branches in the UK in the early 21st century.

Lowy’s incredible success is undoubtedly due to a sharp business mind but more than this, a strength of character that can be almost certainly credited to his background as a Jew in war-torn Europe.

Carving a Career from Catastrophe

His story is a remarkable rags-to-riches tale. Lowy’s early years were marred by tragedy. As a young man he moved around frequently, living in Hungary, France and Israel before he finally settled in Australia in 1952. It was in Hungary that he last sighted his father Hugo Lowy, a travelling salesman.

War had broken out across Europe and Hugo had gone to Budapest train station to buy tickets for his family to escape following the Nazi invasion. The family never saw Hugo again, and it was many years later before Frank found out the truth about his father.

Eventually, after decades of uncertainty, Frank found out in the 1990s that his father was killed at the hands of the Nazis. He had been taken from the train station to Auschwitz, where he was mercilessly beaten to death after refusing to surrender up his prayer books for burning.

Lowy remained in hiding in Hungary with his mother, estranged from his siblings - two of whom went into hiding elsewhere - and his older brother, who went to a labour camp. Living in ghettos and fighting for survival is, perhaps, one of the reasons for his extraordinary success after arriving in Australia with few possessions and no English.

A Twist of Fate

The uncertainty surrounding his father’s death was one of the hardest things about his disappearance. Lowy had no way of knowing what had happened until a chance meeting between one of Lowy’s sons and the son of another man, also called Lowy, who had been on the same fateful journey to Auschwitz. It was only then that the full horrors of Hugo’s end were revealed.

In the days of technology such as the internet with unlimited broadband and access-all-areas information, it’s hard to imagine that Frank Lowy had to wait for so long before he found out the fate of his father.

These days, people are connected across the globe at the push of a button: a ‘like’ here or a ‘share’ there. The world is suddenly such a small place with information so readily available that if something similar happened today, in the Information Age, it may not have taken so long for Lowy to find out the truth. The twist of fate that allowed this chance meeting on the other side of the world is astonishing.

But perhaps the lack of internet resources at the time was a good thing for Australian business because if he had found out sooner, perhaps Lowy would not have achieved the things he has. When he did eventually know the truth, it was not until 2009 that Lowy was able to lie some of the old ghosts to rest and revisit his father’s journey to Auschwitz. It was years later before he was able to open up and tell about his experience.

One of Life’s Givers

Lowy was appointed Companion of the Order of Australia in 2000 for his service to his retail expansion in Australia and because of his involvement with social and cultural programs.

In 2002, he was named as Australia’s leading philanthropist by Philanthropy Australia. In 2008, he was commemorated on a postage stamp along with four other leading Australian philanthropists.

These days, at 81 years old, Lowy is taking more of a back seat with the business. He has stepped down as executive chairman of Westfield Group, but still likes to keep an eye on his empire. Two of his sons, Peter and Steven, are taking over as joint chief executives while Frank remains as chairman.

The fire still remains in this extraordinary octogenarian. He still intends to keep a close eye on his business interests and is looking forward to the expansion of Westfield into a new market, with possible development in Asia.