Control Your Dreams: Now There&#039;s an App for That 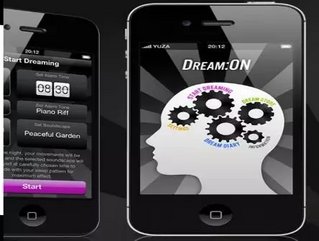 It seems nothing is untouchable in the world of smartphone apps.

The Los Angeles Times reported today that iPhone users will have an opportunity to test Dream:ON, a new app that monitors and records your movements during the REM sleep cycle in a social experiment that aims to help you control and track your nightly dreams.

Using a selected soundscape (birds, waves on the beach) to influence the type of dream you’d like to have, your bedside mobile will begin playing once the Dream:ON app has determined that you’re in a deep sleep. When the app senses that you’re moving out of the REM cycle, an alarm will sound to wake you up at “the optimum moment” so you can record the details of your dream into the “dream catcher” database. By the next morning, you’ll have a chart detailing your sleep pattern and be on the path to better wellbeing, the website said.

“We have created a new way of carrying out mass participation experiments,” said Britain’s University of Hertfordshireprofessor Richard Wiseman on the Dream:ON website. According to their Twitter feed, after one night, the team had received dream data from 100,000 users.

"A good night's sleep and having pleasant dreams boosts productivity and is essential for psychological and physical well-being,"MrWiseman told the Daily Record earlier this week. He designed the app and announced the experiment at the Edinburgh International Science Festival.

“We still know relatively little about the science of dreaming and this app may provide a real breakthrough in changing how we dream, and record and track those dreams,” he said.

The LA Times reported that Android users will have a chance to participate in the experiment when the Dream:ON app becomes available in the Google Play store later this year.