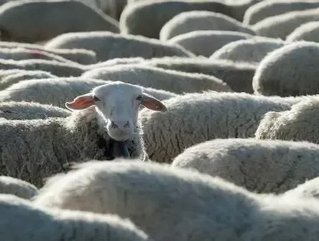 Graphic footage exposing the inhumane slaughter of 21,000 Australian sheep in Pakistan aired on ABC’s Four Corners programme last night, causing the live export industry to voluntarily suspend all sheep exports to Pakistan and Bahrain, according to a statement issued by the National Farmers Federation (NFF).

Sheep exporter Wellard Group is at the centre of the story: the Perth-based company was responsible for delivering the sheep to Bahrain in accordance with an agreement instated between the two nations, but when Bahrain rejected the sheep due to ‘disease claims,’ they were transported to the Pakistani seaport city of Karachi. The Australian exporters were removed from the sheep’s holding compound here, and the sheep were later beaten, stabbed and even buried alive.

Though Sindh provincial government officials claim the slaughter was necessary due to health concerns, Australia’s live export industry and the Department of Agriculture, Fisheries and Forestry (DAFF) have fervently denied these claims.

“The conditions under which this cull of healthy Australian sheep was performed are extremely distressing and appalling,” the NFF statement said.

The footage is a grim reminder of the story exposed by Four Corners last May about the Indonesian abattoirs exposed for extreme mistreatment of Australian cattle, which sparked a nationwide demand for the Federal Government to end live cattle exports to its biggest importer. For several weeks, the government cancelled all live exports to Indonesia, and this decision reportedly “had the effect of devastating the industry,” Liberal frontbencher George Brandis told The Australian.

“The welfare of animals is of paramount to concern to the Australian livestock production and export industries,” the NFF statement said. “Australia is the only country, of the more than 100 countries across the world that export livestock, which actively works in overseas markets to help improve animal welfare conditions.

This Four Corners segment will be replayed at 11:35 pm tonight on ABC.