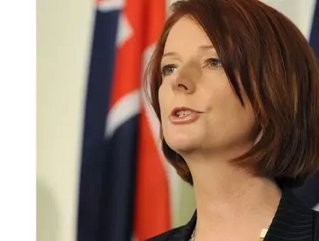 Not only is Gillard the first female to ever hold the position, she is the first who has never been married and the first since Billy Hughes (1915-1923) to have been born overseas.

Gillard was born in Barry, Wales and moved with her family to Australia when she was five years old.

She got her first introduction to politics during her second year at the University of Adelaide, but decided to take a different route initially, moving to Melbourne and earning a law degree.  During her time in Melbourne, Gillard’s political leanings strengthened as she led the Australian Union of Students and served as secretary of the Socialist Forum.

During her time in office, Gillard has said that her leanings are toward issues in education and that she’s not very interested in foreign policy. Gillard’s membership in the Victorian Left faction of the Labor Party has been described by biographer Jacqueline Kent as “more organisational than ideological,” as Gillard’s election to Prime Minister occurred because of support from the Right factions of the party.

In contrast with predecessor Rudd, Gillard is against a “big Australia,” saying that “Australia should not hurtle down the track towards a big population.”

Swan has been an Australian Labour Party member of the Australian House of Representatives and became Treasurer after Labour’s 2007 election win.

Earlier this year, Swan released Australia’s 2011-2012 budget, insisting that it needs to toughen up in order to deliver a surplus in 2012. Swan has pledged to return Australia back into the black by initiating $22 billion in cuts over four years, including a halt on the income limit on family assistance at $150,000 a year.

“...The purpose of this Labour Government and this Labour Budget is to put the opportunities that flow from a strong economy within reach of more Australians,” Swan said during his 2011-2012 Budget Speech. “We are on track for surplus in 2012-13, on time, as promised.”

Jenny McAllister has been a Labour party member since 1992, and operates with the notion that her active party membership can make a difference on important issues.

Throughout her career, McAllister has been active in campaigns for the environment, peace and women’s parliamentary representation.

McAllister’s politics focus on economics, indigenous culture and policy, the environment and Australia’s role in the Pacific.

Abbot supports Australia’s constitutional monarchy and has argued against a republican system of government in the past.

He has also gone on the record doubting the science of climate change, saying that the economics of an Emissions Trading Scheme was “a bit dodgy.”

“I am always reluctant to join bandwagons. I think there are fashions in science and in the academe, just as there are fashions in so many other things. But look, we should take reasonable precautions against credible threats. I think it is perfectly reasonable to take action against climate change. The problem with the Rudd Government’s position is that Australia could end up impoverishing itself through this dramatic ETS, and not do anything for the environment if the rest of the world does not adopt an ETS or something like it.”

Abbott has taken similarly strong stances on other subjects, as he is pro-life, an opponent of embryonic stem cell research and euthanasia, and has stated that he would not amend Australian law to recognise gay marriage.