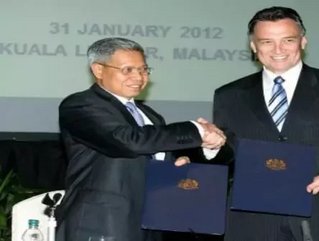 Australia and Malaysia, the eighth-largest economy in Asia, will sign a free trade agreement in Kuala Lumpur today – only the sixth bilateral deal in Australia’s trade history.

The agreement, to be signed by Australia’s Trade and Competitiveness Minister Craig Emerson and Mustapa Mohamed, Malaysia’s Minister for International Trade and Industry, will specifically benefit Australian exporters of manufactured goods.

Under the new regulations set forth in the trade deal, called MAFTA, 97.6 per cent of recent goods imported by Malaysia from Australia will be guaranteed tariff-free entry. By 2017, this figure will increase to 99 per cent.

“Australian exporters of automotive parts and a wide range of other manufactured products, as well as exporters of iron, steel and milk, will benefit from improved market access under the agreement," said Dr Emerson in a statement about the agreement.

Education and professional services will also gain increased market access through MAFTA, a benefit further facilitated by the smoother via acquisition process and ability for Australians to become majority owners in Malay businesses.

According to The Australian, MAFTA will provide Australia’s business community with a key audience:

“The deal will provide Australian companies with better access to a successful Asian economy with a population of 28 million; a large, well-educated middle class; average personal income of about $10,150 a year and gross domestic product forecast by the International Monetary Fund to keep growing at an annual rate of more than 5 per cent.”

Trade between Malaysia and Australia was valued at AU$16 billion in 2011, according to the Wall Street Journal.